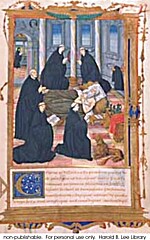 A group for those interested in the study of religion globally, primarily with a historical perspective. Included would be early ritual evidence from Neolithic Peoples, tribal ceremonies, Aboriginal faith & belief systems, Religions of the West, including Christianity and Science, Religions of the Middle East, Africa, Asia....Jones Town. Anywhere a population of human beings have attempted to understand "truth" and developed rituals of faith.