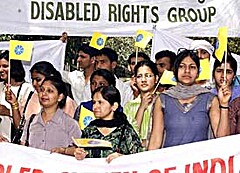 A group for (dis)abled-identified readers, writers, and activists and our allies commited to bringing ableist oppression to a grinding halt.