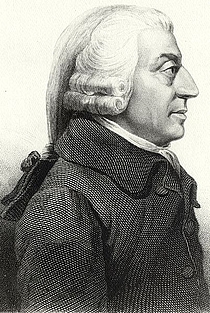 About my libraryThe contents of Adam Smith’s library are reasonably well documented, due to the fact that a catalogue of his books was prepared at his direction in 1781, and the fact that half of his collection (inherited by his nephew’s daughter, Mrs. Bannerman) stayed intact until it was donated to the University of Edinburgh in 1884 and 1894. The other half, inherited by his nephew’s other daughter, Mrs. Cunningham, has been more dispersed. An 1878 sale from those holdings scattered many books around the world. Others were later given to the Queen’s University Belfast. Still others were sold in 1918 to a London dealer and were purchased—or some portion of them—in 1920 by Prof I. Nitobe of Tokyo University. Books from the library continued to come to light until relatively recently. The provenance is established by the presence of Smith's Bookplate, reproduced below. A detailed account of the history of Smith’s library is given in Viner 1965. A briefer, but more up-to-date, account is given in Mizuta 2000.

Smith’s library is of the utmost importance in understanding Smith’s life and work. He was not an "armchair philosopher." He engaged enthusiastically with the literature of his time, and his research was strongly empirical.

The current critical edition is Mizuta 2000. He lists 1808 items. Multi-volume works are given as a single item, but separate works bound together are given separately.

Of special interest is the 1781 catalogue, which contains some of Smith’s own annotations. This catalogue is more properly a shelf list, identifying the location of each book. Viner speculates that the catalogue was for a single room; he warns against inferring that the catalogue represents all of Smith’s holdings for 1781. He notes in particular one entry: a volume of Epictetus, with the note "carried up stairs" (Mizuto 2000, no. 574). A full transcription of the 1781 catalogue is given in Yanaihara 1951, appendix II.

The library presented here — still very much in progress — is an amalgam of information from the several catalogues. Works are tagged where (1) they appear in the 1781 catalogue; (2) the title of the work is unknown (usually because the 1781 catalogue was imprecise, and the book is lost); (3) the book itself has not been located.

Where the title of a work is unknown, it is given in guillemets, following precisely the title given in the source (usually the 1781 catalogue). The assigned date is the date of the most probable corresponding work.

Here's a notion: if you come across a copy of any book marked "Lost," look to see if it has Adam Smith's bookplate in it.

Mizuta, Hiroshi. 1967. Adam Smith’s Library: A Supplement to Bonar’s Catalogue with a Checklist of the Whole Library. Cambridge.

Simpson, Murray. 1979. "Books Belonging to Adam Smith in Edinburgh University Library: A Survey of Newly Discovered Items, with a General Discussion." In: The Bibliotheck. Vol. 9. Pp. 187-99.

Yanaihara, Tadao. 1951. A Full and Detailed Catalogue of Books which Belonged to Adam Smith Now in the Possession of the Faculty of Economics, University of Tokyo. With Notes and Explanations. Tokyo. Repr. New York 1966.

Please note that I usually assent to friend requests only from Adam Smith's contemporaries. This is simply because the notices I receive from those libraries are most useful to my own efforts, and with too many friends this valuable information is bumped from my home page.