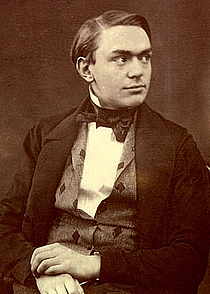 About meAlfred Nobel (21 October 1833 - 10 December 1896) was a Swedish engineer and scientist. He developed an interest in technology at an early age and by the end of his life had registered over 355 patents. Nobel was also interested in literature and languages. His passion for the humanities and for society as a whole was reflected in the five annual awards he established in his last will and testament.

About my libraryOn his death, the renowed inventor Alfred Nobel left behind a private library of over 1500 volumes. These titles were a reflection of his varied interests, encompassing works of history, philosophy, science, and contemporary fiction in multiple languages.

Nobel was educated in St. Petersburg by means of private tutors who instilled in him a love for the sciences, but also the humanities. He was an exceptionally gifted student, who by the age of 17 had become fluent in Swedish, French, English, German, and Russian, reading European classics in their original languages.

When Nobel moved to Paris at the age of 40, his personal library was located at his home on Avenue Malakoff. It was described as a “well-stocked library, capable of satisfying the most divergent wishes” by Bertha von Suttner, who would later become a great influence on Nobel's reading habits. While in Paris, Nobel was immersed in literature, meeting with writers such as Victor Hugo and the academic circle of La Revue des Deux Mondes. Among the titles of contemporary literature which were added to his collection in Paris were also bound volumes of the classics, such as Shakespeare, Goethe, and Walter Scott.

Nobel was forced to leave Paris in 1891 for reason of his health, and along with his collection he settled in San Remo on the Italian coast, where he died in 1896. His library was returned to Stockholm where it is now held by the Nobel Foundation.

Sources: The library of Alfred Nobel was reproduced from a list of titles arranged by the Nobel Library of the Swedish Academy, from a collection now held in The Nobel Museum at Karlskoga. The individual entries were measured against various online catalogues to produce an accurate record of the collection.

Tags: The tags included in this library were provided by the Nobel Library of the Swedish Academy and are reflective of that work's particular discipline.