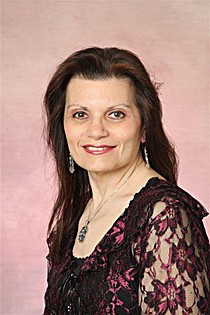 About my libraryI am the author of three Arthurian novels:

-The Quest for Excalibur
THE QUEST FOR EXCALIBUR is my first book. This story came to me in a way that was unexpected. One night I watched the minieseries MERLIN starring Sam Neill and Isabella Rosalini. It was the rekindling of an old flame. At the end of the movie Merlin tells his love, Nimue “There is no more magic.” I think somehow I could not live with that. At work while I was applying make-up on a client, in the mirror Arianna came to me as if in a vision. I watched her unearth the sword EXCALIBUR at the edge of the Lake, where the Lady of the Lake lived. From there it was a journey that I had no idea was about to happen. Excalibur the relic sword of Arthur took Arianna from her time to the Sixth Century where Arianna and King Arthur found a Kindred Friendship and Merlin and Arianna adopted each other as Merlin sees that this lady was sent to them for a reason, but why?

-Excalibur and the Holy Grail
In my first book Arianna was supposed to come back and never return. But Galahad did not want her to leave for good he wanted her to come back. They formed a pact and Arianna was told that when Galahad needed her she would be sent a signal. In EXCALIBUR AND THE HOLY GRAIL, Arianna helps Galahad prepare to search for the Grail. It became an amazing journey as Arianna begins to find out why she was broought back in time, and why she and Arthur formed a special friendship before she witnessed his murder, by the hand of his son Mordred.

-Excalibur Reclaims Her King (Available now through my website or Amazon!)
A modern day New York Mother is called upon to battle an evil Queen from centuries past and to open the time gates to Camelot where she must heal Merlin, raise Arthur from the dead and battle an army of heretics to unite the religions of the 6th century under Christ.