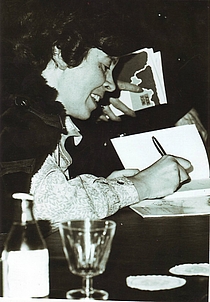 About meThis is a legacy library in progress from Maria Àngels Anglada (1930-1999). She was a prestigious Catalan writer. She studied classic Philology. She started as a teacher, poet and reviewer. She said: I'm a poet who writes novels. During the Spanish Franco dictatorship some local clandestine political meetings were taken in her house. Her books show her concerns about human rights, ecology anb about the survival of classical studies. She was fond of classic music. Another passion and worry of her was the Catalan language and its survival without and state on its own. She was also essayist and translator from Italian poetry, Latin and classic Greek. She was member of the Catalan Studies Institut (Institut d'Estudis Catalans).
Her most translated novel is The Auschwitz violin (Editorial Columna 1994), it has been translated into 12 languages. The Aram's notebook (Editorial Columna 1997)is about the Armenian Genocide (1914-1919). She wrote the novel during the Bosnian War. She had the idea while she was writing a poem, she tought she couldn't write a poem. Some Anglada's characters ara musicians, writers or people connected with them or even with characters of other writers. In the last mentioned novel Aram is the fictional son of Daniel Varudjan, a real Armenian poet, murdered during the Armenian Genocide. In her last book of short histories Nit de 1911 the story that gives its name to the book has the Greek poet Konstandinos Kavafis as a manin character. Or in Viola d'amore (Destino, 1983) with the violinist Gerda, a fictional grand-daugther of Hanno Buddenbrook who wouldn't have died (see The Buddenbrook, by Thomas Mann).
Her collected prose was published in 2001 by Edicions 62 (volum I) anb her collected poetry has appeared in 2009 (Obra Completa, Editorial Vitel.la). Francesc Foguet wrote a biography in M.Àngels Anglada Passion for memory (Portic, 2003). Some of her reviews ara collected in Encouragement to reading (Publiccions de l'Abadia de Montserrat, 2008), while her articles of opinion are in Engagement of a poet (Eumo Editorial, 2009).
A lectureship of the Girona University is dedicated to her: www.udg.edu/catedres/MAngelsAnglada

About my libraryThis legacy library is based in the extant books of her that a relative has. Is not all her library, only a part. Other sources are some lists made by the writer: a list of poetry books written or translated into Catalan and the list of literary reviews published by her. Her library was shared with her husband, Jordi Geli, interested in history.