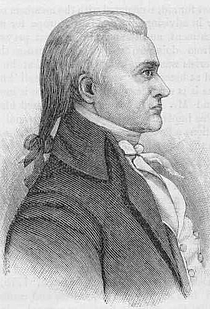 About meCaesar Rodney (7 October 1728 - 26 June 1784), Delaware statesman, military leader and Signer of the Declaration of Independence.

Rodney was born into a leading family in Delaware politics, his grandfather William having been the first speaker of the colony's General Assembly. He held various local offices (Sheriff of Kent County 1755-1758; Register of Wills, Recorder of Deeds, Clerk of the Orphan's Court, Justice of the Peace, judge), and from 1769-1774 sat on the Supreme Court of the Lower Counties. From 1761/2 until 1775/6 he was a member of the Delaware Assembly, several times serving as Speaker.

In 1765 Rodney was a delegate to the Stamp Act Congress, and played a major role in the state's committee of correspondence. He sat in the Continental Congress from 1774-1776 along with his political ally Thomas McKean and their opponent George Read. Simultaneously Rodney served as Brigadier General of Delaware's militia, so he was often away from meetings of the Congress; his eighty-mile ride through the night of 1 July 1776 to vote with McKean for independence is well known.

Rodney was defeated for election to the new general assembly in 1776, and was not named a delegate to the wartime state constitutional convention. He continued in command of the state militia, and was re-named a delegate to the Continental Congress in late 1777. In March 1778 he was elected President (Governor) of Delaware, serving until 1782. He was then elected a member of the Confederation Congress in 1782 and 1783, but did not serve due to ill health. He was named Speaker of the General Assembly again for the 1783/84 session, which met for its April 1784 session at Rodney's home, Poplar as a gesture of respect. He died there in late June.

About my libraryRodney's library as included here is that listed in the probate inventory of his estate, taken 20 July 1784. The books are valued at a total of £4, 6 shillings (the total value of the inventory is £1932).