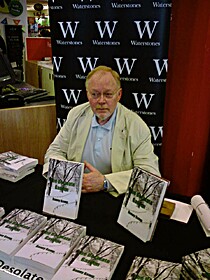 About meI am sixty-three, and amongst many other things, was once a London Police Officer arrested for attempted murder. For the record, I got out of that, and haven’t tried it since. My novel, The Desolate Garden, was published in March this year. It has been compared to: The Constant Gardener, The 39 Steps and The Third Man.

The rights to the novel have been sold to a London Film Production Company and a ‘set’ is being constructed in The Arab United Emirates. The process of turning the story into a film is due to start this year with $30,000,000 being spent on the conversion.

About my libraryOnce arrested for attempted murder in England, Danny Kemp decided that a career in writing was for him. No different than Nicholas Sparks, Mr. Kemp’s first novel The Desolate Garden was picked up in a snap, and is currently being rendered into a movie. Outside the field of “run-ins with the law Kemp draws on decades of experience, encompassing the Metropolitan Police, the tenancy of three English Public Houses, and the Licensed Taxi Trade in London, as well as being a radio voice-over artist in several radio plays, where he honed his sense of story and pacing.

The Desolate Garden is the story of a secret Royal and Ancient Government Bank, established in the fourteenth century, located in London, England, near what would become Queen Anne’s Gate, and a stones throw from a more recent edifice, Buckingham Palace. Since its inauguration, only one family has ruled over the Bank; the Paterson’s, Earls of Harrogate, hereditary Lords of the Realm. Down through centuries the Bank’s capital has grown in many surreptitious ways, but upon the election of a Socialist Government in 1945 at the end of the Second World War, the Bank’s chief executive officer, Lord Maudlin Paterson, sensing the winds of change, offers the bank’s services exclusively to the Secret Intelligence Services, a move that ensures the Bank will endure the forces of a Britain fast descending into grasping Socialism.

It is now the year 2003. And, Lord Elliot Paterson takes over the custodianship of the Bank and begins the task of converting the Bank’s hand-written ledgers into digital form and discovers in a hidden ledger, dated 1936, a vast quantity of money erased from the accounts. He digs deeper into the mystery, and comes across some initials along with an address in Leningrad, a major port in Stalin’s Soviet Union, in the margins of another ledger. Lord Elliot suspects that his grandfather, Lord Maudlin, was funding a Russia spy but stays silent until in 2012. In his waning days, he telephones his eldest son, Harry, to pass on the fears behind his suspicions.

The novel opens with Lord Elliot’s murder when Lord Harry Paterson, forty, single, a dandy living on the Harrogate estate, and long recruited into the secret world after his service in the Army, is summoned to London and must ascend into his family’s true inheritance.

Lord Harry meets Judith Meadows, an attractive, but otherwise a stick-figure of a woman, in the world-famous Martini bar at Duke’s Hotel in London’s St James’s. Meadows plays him for the rake that he is before destroying his hopes of bliss when she discloses that she works for the Home Office and is the case officer assigned to unravel the mysterious death of Lord Elliot. As the story unfolds, the relationship between the two, both sexually and intellectually, ricochets back and forth like a train driven by a teenager, stuck in first gear. Lord Harry knows more than he is willing to reveal, and Meadows knows more about his family than Lord Harry does.

The Desolate Garden is especially for readers who like a story, largely rendered through dialogue because it was the dialogue that pulled the work off the page and onto a movie set. This political thriller resonates with charm, deft touches of satire, and romantic entanglement and where the promise of rampant sex is a turn of the page away. At 331 pages, The Desolate Garden makes a “jolly smashing” weekend read.