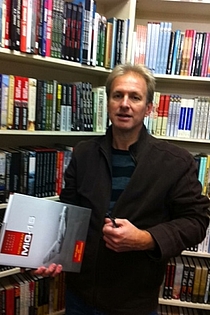 About meWWII airwar/Luftwaffe/Wehrmacht enthusiast. I grew up on the base at RAF Marham ( my Dad worked on Victors..) and after uni I worked at LGW for eight years with a 'major European airline' in flight dispatch..(primarily 737, F100 & A320 types). Son no. 2 flies with BA. While I make no claim to any particular expertise, I did earn a BA (Hons) in German & French language studies and my translation work has been published by Lela Presse, Kagero, Ian Allan/Crecy Classic Publications, Eagle Editions and Red Kite among others. I translated the personal accounts for Theo Boiten's large two volume "Nachtjagd War Diaries" history. I have also translated Erik Mombeeck's JG 2 history ("In the skies of France") and his two-volume history of Jagdgeschwader 4, entitled "Storming the bombers" (I'm especially proud of the title!) Back in 2005 I translated Jean-Yves Lorant's two-volume history of the Luftwaffe's primary 'Defence of the Reich' fighter unit Jagdgeschwader 300, described by Rowan Bayliss writing in his Scale Aircraft Modelling review as " featuring some of the most exciting descriptions of air combat ever written!". I translated Leaping Horseman's well-received " An Infantryman in Stalingrad" (see amazon.com for 5-star reviews) and prepared an English-language edition of Lodieu's " 45 Tigers en Normandie " (so far unpublished). I was project copy-editor on Classic Publications Bergstrom "Barbarossa" series and Chevron Classic's Me 410 Hornisse. More recently I was English-language translator/editor on the three large and impressive 'Luftwaffe Seaplanes' volumes ('Les hydravions de la Luftwaffe') published by Lela Presse (Volume 3 published in April 2014) and some of my translated pieces appear in Classic Publications (Ian Allan) two volume treatment of the Junkers Ju 88. I have prepared the English text for all of Erik Mombeeck's 'Luftwaffe Gallery' series - translating from both French and German texts -including the 'Special Editions' devoted to JG 26, JG 77, JG 54 and JG 5. My feature on Jaguar pilot Alain Mahagne's Desert Storm experiences appeared in the September 2011 issue of Airfix Model World and see the June & July 2014 issues of " Model Aircraft " for my "wilde Sau und Moskito Jagd" feature. At last count I'd translated some seven volumes of Luftwaffe fighter unit histories and have copy editor/translator credits in many Kagero volumes. I have just completed three large 250-page volumes of photo captions translated from German, which include Part 5 of the hugely impressive Stipdonk/Meyer "Die Deutsche Luftwaffe - Zerstörer- und Nachtjagdverbände" series published through VDM Heinz Nickel, Zweibrücken, Germany and Parts 1 and 2 of a new Luftwaffe fighter units series for the same publisher. And not forgetting my contributions to Claes Sundin's 'Profile artwork' books; eg " Luftwaffe Fighter Aircraft - Profile book No. 6 " by Claes Sundin

"..The reader must acknowledge that this book is the result of a team effort - I would like to thank my friend Neil Page (FalkeEins) who is well-known for his expertise in this field.." Claes Sundin

" .. Credit must go as well to Neil Page who has produced the translation of the text and has made sure the book is never just a dry account of history as many books are when translated into the English language..." Adam Norenberg, Osprey (review of Storming The Bombers, a Chronicle of JG 4 Volume 2 by Eric Mombeeck)

About my libraryWW II aviation & military history, Pacific air war, Luftwaffe, RAF, 8th USAAF, Ostfront, Endkampf, and many rare German and French titles. While I do buy (and list) Ospreys I won't list them in my library unless they really are worthy of recommendation - IMHO of course!