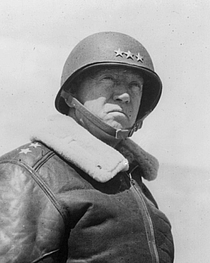 All my life (or should I say lives?) I knew that I was born to be a soldier. My family maintained an American military tradition from General Hugh Mercer in the American Revolution through my son, George Smith Patton IV, in Vietnam.

I began my military education as a young boy by reading classics like those of Thucydides and Herodotus. This self education continued throughout my life, and I died with one of the most extensive military libraries of anyone in the world.

1943: Promoted to lieutenant general. Relinquished command of II Corps to Omar Nelson Bradley. Resumed command of I Armored Corps in preparation for invasion of Sicily.

1944: Ordered to England to take command of Third United States Army in preparation for invasion of France.

Biographical timeline from George S. Patton: A Register of His Papers in the Library of Congress.

About my libraryMy library has been cataloged by LibraryThing members sergerca and BOB81. The books of my extensive library are from the excellent book The Patton Mind: The Professional Development of an Extraordinary Leader by Col. Roger H. Nye.

The book's bibliography was compiled from:

1. Selected contents from my home library (circa the late 1940s) in South Hamilton, Massachusetts.
2. My collection housed at the United States Military Academy Library.

LocationBuried in the American Military Cemetary in Hamm, Luxembourg