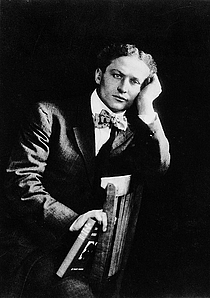 About meHarry Houdini (24 March 1874 - 31 October 1926), Hungarian-born magician and escape artist. Born Erik Weisz in Budapest, Hungary, Houdini immigrated to the United States in 1878 and settled in Appleton, WI. The family moved to New York City in 1887, and Houdini began a career in magic as early as 1891. In the 1920s he became well known as a debunker of spiritualist hoaxers.

About my libraryHoudini described his library as "one of the largest libraries in the world on psychic phenomena, Spiritualism, magic, witchcraft, demonology, evil spirits, etc." The largest portion of the library was bequeathed to the Library of Congress, and that forms the basis of this catalog. Additional books have been added from the Messmore Kendall collection, now at the Harry Ransom Center at the University of Texas, Austin, and from various auction and bookseller catalog descriptions.

Large portions of Houdini's library are not included here: some books were given to the American Society for Psychical Research, and others on crime were given to Houdini's friend Lewis E. Lawes. James Thurber wrote a 1927 letter about Houdini's library in which he notes that Mrs. Houdini gave him several books from Houdini's collection. He writes that after the various bequests of books, "The family and a few friends shared the rest, his miscellaneous books. I was certainly lucky to be one of the 'friends'."

Anyone with information on other books from Houdini's library: we'd love to hear from you. Please contact Jeremy Dibbell.