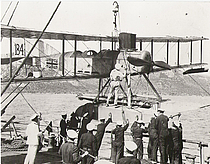 About meBeen collecting too many years to admit to. Current library is probably the third I've put together, emigrating from the UK to Canada did tend to concentrate the collection. Yes, I do regret some of the ones I let go but have not had to repurchase too many of them. Not that I would admit to anyway.
I would rather buy a book, read it, then pass it on than borrow one from the library. So, my collection often goes through an annual or bi-ennial purge, which also has the advantage of keeping it (more or less) under control.
Most of my collection are by preference hardbacks with dust jackets (which I am slowly uploading).
Pet peeve? Paperbacks masquerading as hard backs. Hard backs should by law (!?) be made from sewn sections. A curse on all cheapskate publishers.

About my libraryStrong on British naval aviation - RNAS, Fleet Air Arm, carriers - from 1908 to modern day, with emphasis on pre-1942. General aviation collection - military (WW1, between the wars and WW2), civil and private aviation, mainly pre jet age. Royal Navy and other navies. A wide ranging general history collection, predominently British, also engineering/industrial revolution, railways. World War 1 is mostly the "Sideshows". A small eclectic collection of fiction (mostly stuff I enjoyed at a younger age), ballet, art and design, architecture and a large Batsford publisher selection. There is also a food and cookery collection which may be added at some stage.