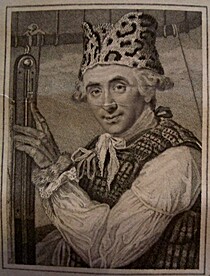 About meJohn Jeffries (5 February 1745 - 16 September 1819), physician. A Boston native, Jeffries took his B.A. at Harvard in 1763 and his M.A. in 1766, then travelled to Scotland, where he briefly practiced medicine and was awarded an M.D. degree at the University of Aberdeen. He returned to Boston in June 1769 and began a medical practice.

In 1770, Jeffries was a witness for the defense in the Boston Massacre trials, having treated Massacre victim Patrick Carr and relaying his testimony to the court. From 1771-74 he served as surgeon of a marine shore hospital, and then from 1774-75 was physician and surgeon at the Boston Alms House. Jeffries was offered the position as head of medical services for the colonial armies when the Revolution began, but declined the post.

Jeffries and his family left Boston with the British troops on 17 March 1776, bound for Halifax. That May he was named chief of the military surgical staff in Nova Scotia, and in 1779 was confirmed as "Apothecary for the Forces at Nova Scotia, Surgeon to the General Hospital at New-York, and Surgeon Major of the Forces in America." It was not until February, 1780, however, that Jeffries returned to America, joining the British army in the southern theater. In July he went to New York, where he quickly sold his commission so that he might return to his children in London (his wife having died there during his absence).

Beginning a general medical practice in London, Jeffries did very well for himself, and soon began focusing on pediatrics and obstetrics. He was interested in scientific pursuits, and on 30 November 1784 financed a balloon flight with Jean Pierre Blanchard in Hyde Park, London. On 7 January 1785, Jeffries and Blanchard went further, crossing the English Channel from Dover and landing in France. The two were taken to Paris, where they were wined and dined (Jeffries even met with John Adams and Benjamin Franklin, to whom he delivered the first recorded air mail (having brought letters on the balloon). Jeffries returned to Dover on 27 February, and wrote up an account of his aerial voyages (later published).

To settle certain family business, Jeffries returned to Boston in November 1789, where he was warmly greeted by his old friends (including John Adams, Elbridge Gerry, and others). Jeffries determined soon after to stay in Boston, and began a medical practice in April 1790. From then until his death, it is said that he delivered some 2,000 babies in Boston.

Jeffries died in 1819 of an "inflammation in his bowels." His diaries are at Houghton Library, Harvard, and some other of his papers are in the Jeffries Family Papers at the Massachusetts Historical Society.

About my libraryJeffries' library of medical books, mostly purchased during his time in London, is documented in a catalog titled "Library of John Jeffries left to his heirs 1820," now in the Countway Medical Library, Harvard Medical School. A note in that catalog reads "Of the medical books which he left to his son Dr. John Jeffries those marked in red were given by Dr John Jeffries and his son Dr B. Joy Jeffries, in 1867 to Library of Harvard University, duplicates to go to Library of Medical Department in Boston and duplicates there to Public Library Boston."

The books so marked have been indicated in Comments.

Other books included here are those that include Jeffries' bookplate but not included in the catalog of his medical library. These seem to have gone to other family members.