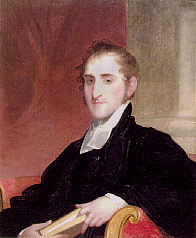 About meJoseph Stevens Buckminster (26 May 1784 - 9 June 1812), Boston minister and biblical scholar. Buckminster graduated with both his bachelor's and master's degrees from Harvard College in 1800 and became minister of Boston's Brattle Street Church. The following year he traveled to Europe, where he purchased many of the books which comprise his library.

His early death at the age of just twenty-eight robbed the world of a promising talent.

About my libraryBuckminster's extensive library was put up for sale after his death, and is documented in the catalogue for that auction: Catalogue of the library of the late Rev. J. S. Buckminster. Boston: Printed by John Eliot, Jun. 1812, which is available digitally here.

The auctioneers, Whitwell & Bond, placed the following notice in the catalogue of Buckminster's books: "The following Books and Pamphlets will be sold by Public auction at the Mansion-house of the late Rev. Mr. Buckminster in Court Street. The sale will commence on Tuesday, the twenty fifth of August, at nine o'clock, A.M. and, adjourning over Wednesday and Thursday, it will recommence at the same hour on Friday, and continue until the intire Library is sold."

The descriptions as provided in the auction catalog are given in the Comments field for each title.

A few other titles, mostly given to the Athenaeum by Buckminster prior to his death, are also included here. Buckminster often mentioned other books he was reading in his journal; those entries (included here where possible) are taken from his sister Eliza Buckminster Lee's Memoirs of her brother (1849).