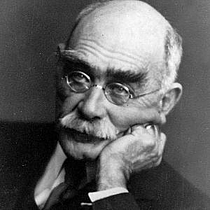 About meRudyard Kipling (30 December 1865 – 18 January 1936) was probably the most popular English writer of the late 19th and early 20th century. He was the first writer in English to be awarded the Nobel Prize for literature (in 1907), and he remains the youngest ever winner.

Kipling was born in Bombay [Mumbai], India, where his father, Lockwood Kipling, was head of a technical school. Like most middle-class "children-of-empire" he was sent to England in early childhood, attending the United Services College in Devon. Returning to India in his teens, he worked as a journalist, initially on the Civil and Military Gazette in Lahore. He soon built up a reputation as a writer of ballad verses and short stories. By 1889, he was earning enough to be able to leave India again and live as a full-time writer, first in London and then, after his marriage to Carrie Balestier (an American), in Vermont.
In 1896 the Kiplings moved back to England, settling permanently at Bateman's, a 17th-century house in Sussex, in 1902.

Kipling is perhaps best-known nowadays for his books for children, in particular the Jungle Books, Kim, and the classic school stories in Stalky & Co., but that's only a tiny part of his output, and he wrote many fine short stories and poems for adult readers too.

His writing has a very direct, popular appeal, with strong rhythms and very memorable lines it's fun to recite. His narrators are often ordinary working-class people: private soldiers, seamen, Indian domestics. He believed strongly in the duty of developed nations to take responsibility for looking after "the lesser breeds without the law" whose countries they were exploiting, and his subject-matter is very tied up with the politics of empire. He was the writer who put phrases like "the white man's burden" and "the road to Mandalay" into the language, but also "you're a better man than I am, Gunga Din" (and "the female of the species is more deadly than the male"!).

About my libraryThis library comprises the books preserved by the National Trust at Kipling's house, Bateman's in Sussex, which is run as a museum and is open to visitors.