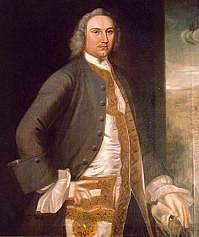 About meLandon Carter (18 August 1710 - 22 December 1778), was the son of Robert "King" Carter of Corotoman, Lancaster County, Va. and his wife, Elizabeth Landon Willis Carter. He was educated in England, built Sabine Hall in the 1740s, served in the local vestry, and commanded the militia. He was elected to the Virginia House of Burgesses in 1752 and served until 1768, when he was not reelected. He was an advocate of American rights and supported the Revolutionary cause until his death in 1778.

"The Diary of Colonel Landon Carter of Sabine Hall, 1752-1778" was edited by Jack P. Greene and published by the Virginia Historical Society in 1965.

Robert Wormeley Carter (1734-1794) of Sabine Hall in Richmond County, Va., was the son of Landon and Elizabeth (Wormeley) Carter. He served in the Virginia House of Burgesses, 1769-1776; the Virginia House of Delegates, 1779-1782; and was a member of Virginia revolutionary conventions in Williamsburg and Richmond, 1775.

About my libraryThe data is based on 1) title pages of the libraries of Landon Carter and Robert Wormeley Carter at Sabine Hall, Richmond County, Virginia photographed by Colonial Williamsburg with the permission of the Rev. Dabney Wellford, Sabine Hall, September 9, 1958 and 2) Curtis, Carol Edith. "The Library of Landon Carter of Sabine Hall, 1710-1788". Master's Thesis, College of William and Mary, 1981. Incomplete bibliographic information was verified using VIRGO, the catalog of the University of Virginia Libraries and Eighteenth Century Collections Online (ECCO).

Many of these books are now owned by the University of Virginia Libraries.