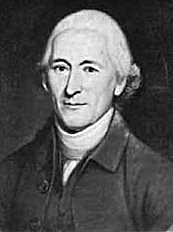 About meLewis Morris III (8 April 1726 - 22 January 1798), New York landowner, lawyer, and statesman. Morris, a 1746 graduate of Yale, engaged in agricultural pursuits until 1760, when he was appointed a judge in the Court of Admiralty, a post he held until 1774. Morris served in the New York provincial convention in April 1775 at the outbreak of the Revolutionary War, and as a delegate to the Continental Congress 1775-1777 (in which capacity he signed the Declaration of Independence). He held several state and local positions during and after the Revolution, including service as a state senator 1777-1781 and 1784-1788. Morris was a member of the first New York Board of Regents, serving from 1784 until his death. He also sat as a delegate to the state convention which adopted the Federal Constitution in 1788.

Morris' library includes many books inscribed or signed by Lewis Morris I (15 October 1671 - 21 May 1746), the grandfather of our subject. Lewis Morris I served in the colonial governments of New Jersey and New York, including as governor of New Jersey beginning in 1738 until his death.

About my libraryMorris' library, of law books, is now at the Lillian Goldman Law Library at Yale Law School. The collection can be browsed through their online catalog here. Their call numbers for the books are included in the Comments field for each record.

The collection was donated to the Yale Law Library in 1960 by three of Lewis Morris' descendents: A. Newbold Morris (Yale Law School Class of 1928), Stephanus Van Cortlandt Morris, and George L. Kingsland Morris.