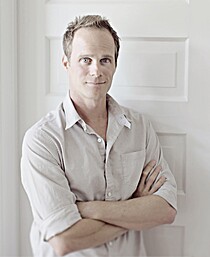 About meNick Reding was born in Saint Louis, Missouri, and received his B.A. in Creative Writing and English Literature from Northwestern University in 1994. He has an MFA in Creative Writing from N.Y.U., where he was a University Fellow from 1995 til 1997. He lived in New York City for thirteen years, where he worked as a magazine editor, a graduate school professor, and a freelance writer. His first book, The Last Cowboys at the End of the World, was published by Crown in 2002. Methland is his second book. His work has appeared in Harper's, Food and Wine, Outside, Fast Company, and Details. He lives with his wife and son in Saint Louis.

About my libraryMy library is a little sad for someone who writes for a living. I'm more given to reading the same books over several times in hopes of understanding how someone did what they did than I'm given to reading many books once. I'm not sure I'm proud of that, or that it's effective, but it's what I do. Examples are In Cold Blood, The Soccer War, Where I'm Calling From, and Blood Meridian. I love short stories and magazine-length journalism. Most weeks I try to take the latest New Yorker on a dinner date and read as much of it as I can. I also read the paper each morning, normally the New York Times. Beyond that, I'd prefer to fly fish or see to my garden or goof off with my son than read.