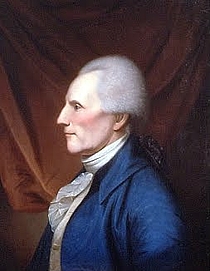 About meRichard Henry Lee (20 January 1732 - 19 June 1794), planter and Virginia statesman, the originator of the resolution for independence in the Continental Congress and a Signer of the Declaration of Independence. The son of Virginia politician/planter Thomas Lee and Hannah Ludwell Lee, the brother of Francis Lightfoot, Philip Ludwell, William and Arthur Lee and Hannah Lee Corbin, the nephew of Captain Henry Lee, and the cousin of Squire Richard Lee.

Lee died at his Westmoreland County plantation Chantilly in 1794.

About my libraryLee's library as cataloged here is taken from the probate inventory of his estate, taken 1 August 1794. It includes lists of broken sets as well as books bequeathed by Lee to his sons Cassius and Francis Lightfoot.