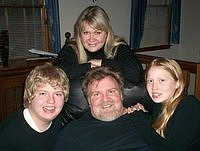 About meI'm presently a school counselor, former history teacher who still has an abiding interest in history and politics, especially anything to do with presidential history and leadership. I also enjoy certain mystery series and old pulp writers such as Robert E. Howard, Hugh B. Cave, H. P. Lovecraft and others.
I enjoy my job, but if I had it to do over again I would have pursued library science and/or graduate degrees in history, which I may still do after I retire from my present job.
Besides my books I enjoy movies and spending time with my family.

About my libraryI'm a recovering biblio-addict (I think that's the right term) who now goes to the library most of the time instead of the bookstore. I still have more books than is probably reasonable, but I've always wanted a large library ever since I read about Thomas Jefferson's when I was a kid. Besides the history, biography, and political stuff there's sports, especially football and track, pulp fiction from the 30's, 40's and 50's. Also mystery series galore. Some science fiction, fantasy, and classics. I love humorous writers, such as P. G. Wodehouse, Janet Evanovich, and Dave Barry.
As you would expect from an educator I also have a lot of volumes on education, teaching, and counseling.

Currently readingBeyond Glory: Joe Louis vs. Max Schmeling, and a World on the Brink by David Margolick
A Question of Justice: New South Governors and Education, 1968-1976 (Library of Alabama Classics) by Gordon E. Harvey
The President Is a Sick Man: Wherein the Supposedly Virtuous Grover Cleveland Survives a Secret Surgery at Sea and Vilifies the Courageous Newspaperman Who Dared Expose the Truth by Matthew Algeo
Colonel Roosevelt by Edmund Morris
Unheard Cries (Volume 1) by Joyce Mitchell
1776 by David McCullough
Adams vs. Jefferson: The Tumultuous Election of 1800 (Pivotal Moments in American History (Oxford)) by John Ferling
Pale Horse Coming by Stephen Hunter
The Complete John Thunstone by Manly Wade Wellman
Who Fears the Devil (Planet Stories (Paizo Publishing)) [Paperback] by Manly Wade Wellman
The Vampire Master and Others Tales of Horror by Edmond Hamilton
Year Zero: A History of 1945 by Ian Buruma
show all (12)