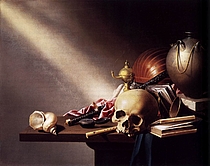 "To a greater or lesser degree every man is suspended upon narratives, on novels, which reveal to him the multiplicity of life. Only these narratives, often read in a trance, situate him before his fate." (Georges Bataille)

"Wide reading shows that most ways of life should be viewed with tolerance, in context, and that we can learn from the collective experience of those who have lived before if we read critically, sceptically, and sympathetically." (Philip Ward)

"My motto, to the extent that I have one, has been noted often enough, and I've always conformed to it. It's the one I've given to old Maigret, who resembles me in certain points...'understand and judge not'" (Georges Simenon)

About my library"A library represents the mind of its collector, his fancies and foibles, his strength and weakness, his prejudices and preferences. Particularly is this the case if to the character of a collector he adds - or tries to add - the qualities of a student who wishes to know the books and the lives of the men who wrote them. The friendships of his life, the phases of his growth, the vagaries of his mind, all are represented." (Sir William Osler)

“Every passion borders on the chaotic, but the collector's passion borders on the chaos of memories. More than that: the chance, the fate, that suffuse the past before my eyes are conspicuously present in the accustomed confusion of these books. For what else is this collection but a disorder to which habit has accommodated itself to such an extent that it can appear as order? You have all heard of people whom the loss of their books has turned into invalids, or of those who in order to acquire them became criminals. These are the very areas in which any order is a balancing act of extreme precariousness." (Walter Benjamin)

"Could you be a fan of Santana and Joyce? A fan of Wagner and Frank Miller comic books? Eclecticism carried a heavy dose of guilt with it. It's an effort to be impure." (José Daniel Fierro, in Paco Ignacio Taibo's Leonardo's Bicycle)

"As I walked in the dark through the tunnels and tunnels of books, I could not help being overcome by a sense of sadness. I couldn't help thinking that if I, by pure chance, had found a whole universe in a single unknown book, buried in that endless necropolis, tens of thousands more would remain unexplored, forgotten forever. I felt myself surrounded by millions of abandoned pages, by worlds and souls without an owner sinking in an ocean of darkness, while the world that throbbed outside the library seemed to be losing its memory, day after day, unknowingly, feeling all the wiser the more it forgot." (Carlos Ruiz Zafón, in The Shadow of the Wind)

"The only attitude worthy of a superior man is to persist in an activity he recognizes is useless, to observe a discipline he knows is sterile, and to apply certain norms of philosophical and metaphysical thought that he considers utterly inconsequential." (Fernando Pessoa in The Book of Disquiet)

Countdown to Quality (Covers to Replace):

Tsundoku (積ん読) - "the act of leaving a book unread after buying it, typically piled up together with other such unread books." (Wiktionary)

“No, these are the ones I have to read by the end of the month, I keep the others in my office.” (Umberto Eco)

"I know why you want me to go to the library. You're trying to trick me into learning how to read. That's what you're trying to do. Who cares about reading? The next thing you know, you want me to conjugate all those verbs and split those infinitives. I hate reading. I just want to be a good housewife." (Sally Brown)

Currently readingPiano Sonata No. 2 - "Concord, Mass., 1840-1860" [sheet music] by Charles Ives
Essays Before a Sonata, The Majority and Other Writings by Charles Ives