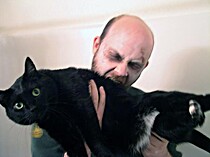 About meWorking on collecting all of the major fictional works of John Cowper Powys. Then I'll work on the non-fiction. If I have any money left over, I'll buy a copy of the 25th anniversary edition of Little, Big.

My userpic is me. It's from Halloween 2006. I showed up to the party without a costume as usual. The hostess was prepared this time: she immediately gave me zombie make-up. Later in the evening, I pretended to be a zombie eating a cat and my girlfriend took the picture.

Currently Reading: The Sound and the Fury

About my libraryMy main interest is world literature so it forms the core/majority of my library. In the past few years I've become more and more interested in Psychology and History. I've also been trying to build a reference library.

The one literary prize that I have a real respect for and have tried to keep up with and tag is the Nobel. There are a few Booker prizes listed in my catalogue but it's mostly because the books themselves have stickers announcing said prize.

Publishers who I like and collect: Sun and Moon (Classics mostly but also the New American Poetry and New American Fiction), NYRB Classics, Dalkey Archive, Green Integer, and I have a subscription to the Library of America.

Authors who I like enough to try to be a completist: Hermann Hesse, Knut Hamsun, William Vollmann, John Cowper Powys, John Crowley.