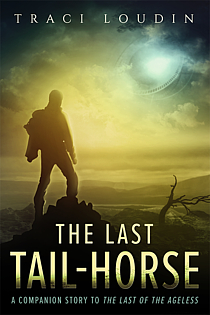 About meMost active on my blog and Google+. I can also be found on Goodreads, Twitter, Facebook, and other social networks.

On my Worldbinding blog, I write about my science fiction and fantasy stories as well as recent conventions and writing events I've attended. I also explore speculative "What If?" topics such as the concept of the Second Self and the question of whether telepathy can really be considered science fiction.

I'll publish my first novel on August 1, 2015. You can find out more about it here: http://www.traciloudin.com/books

Three centuries ago, humans and aliens fought for control of the Earth, ending in an apocalyptic event known as the Catastrophe…

A mutant with the claws, fangs, and fur of a savage tigress, Nyr meets the brutality of the world head-on and plans to become her people’s next clan master. Dalan rescues a fellow shapeshifter, only to learn Nyr deserved to die.

To survive, they must come together with an alien to defeat their true enemy—the Ageless, a tribe of mutants unlike any other. A tribe that may know the secrets of the apocalypse itself.

About my libraryMy parents began reading to me from a very early age, and I've always loved science fiction and fantasy.

When I was in the third grade, I wanted to read my father's science fiction collection soooo badly--especially Edgar Rice Burroughs's Venus series with interesting covers filled by strange beasts and bizarre landscapes. He eventually read H.G. Wells's War of the Worlds to me. I thought it was the best bedtime story ever.

---Favorite Books---
Dune by Frank Herbert; I also recommend the prequels by his son and Kevin J. Anderson

Ender's Game and Speaker for the Dead by Orson Scott Card

The Hunger Games by Suzanne Collins

The Bridge of D'Arnath series by Carol Berg

The Vampire Chronicles by Anne Rice

The Black Jewels trilogy and companion books by Anne Bishop