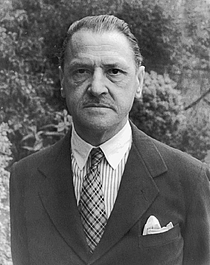 About meW. Somerset Maugham (1874-1965) was one of the most prolific, versatile and successful writers in the period between the World wars. Maugham's oeuvre includes short stories, novels, plays, travel books, essays and autobiographical works.

Born in the British Embassy in Paris on January 25, 1874, Maugham lived in the French capital until the age of 10. Having by then lost his parents, he was sent to England to live with his uncle, the Vicar of Whitstable, Kent. In 1897 he graduated as a doctor from the St Thomas's Hospital in London, but decided to become a professional writer on the strength of his first novel's success, Liza of Lambeth, published in the same year. After a decade of struggle and lack of recognition, he achieved success as a dramatist with Lady Frederick in 1907. In 1908 he had four plays running in London at the same time, but a few years later he retired from the stage in order to write Of Human Bondage (1915), the semi-autobiographical novel for which he is best known.

W. Somerset Maugham died in his Villa Mauresque on the French Riviera, between Nice and Monte Carlo, on December 16, 1965, a few weeks before his 92nd birthday. He had been living there since 1928, except during the Second World War which he spent mostly in the US.

Note on Favourite Authors
The list is highly heterogeneous. The aim is to show the full range of Maugham's reactions to his colleagues. Included are writers on whom he wrote lengthy essays (Kipling, Kant, Goethe, Burke, the "Ten Best"), writers whom he discussed several times at some length (Maupassant, Chekhov, Swift, Arnold), and even writers whom he mentioned seldom but always in significant contexts (Shaw, Shakespeare, Bradley). For some he expressed great, if always qualified, admiration (Hazlitt, Spinoza, Dr Johnson, Voltaire), others he all but disliked (Pater, Conrad, James, Mansfield, D. H. Lawrence), third group he regarded with amused indifference (Wharton, Trollope, Eliot). Some were influential in his youth, but later lost their influence (Meredith, Taylor). In some cases (Arnold, Wells, James), his reactions were no doubt coloured by his personal experience, but writers whom he enjoyed mostly as friends (Reggie Turner), talkers (Edmund Gosse) or hosts (Augustus Hare) are not included. Maugham's choice what to include in his anthologies, however, has been taken into account.

About my libraryIt is based on "Books Given by W. Somerset Maugham", a list made by the King's School, Canterbury, undated (Stott F155). A copy can be consulted in the British Library. The information about the contents of the list was kindly provided by the owner of My Maugham Collection blog.

The list is separated into 19 sections which have been used as a foundation of the tag system:

All publishers come from another list, largely overlapping but by no means identical with the one mentioned above. It was kindly provided by Mr Peter Henderson, Archivist of the King's School, Canterbury.

"I have some three thousand books in my house", Maugham wrote in 1955, but since he was notoriously careless with numbers, it's anybody's guess how many volumes are missing here.

Some books owned by Maugham currently reside in the Harry Ransom Center, University of Texas, Austin. These are tagged "HRC". The information about them was also provided by the owner of My Maugham Collection blog, although it can be accessed online as well (thanks, Jeremy).