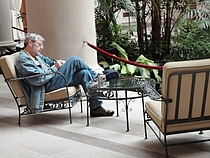 About meNote: It's been a few years since I've been on this site, and updates will not be forthcoming any time soon. Suffice to say that we've removed almost 500 books from our shelves during my absence from LT, and may have bought another hundred more, so the catalog is not a true reflection of the books we currently own. Anything beyond this point is old news.

"Us", really. She's an elementary school librarian and I live vicariously as a librarian through her. In my other life, I'm an editor/proofreader, and do some book restoration work. I also manage a writer's group that meets twice weekly.

Our mutual interests are (in general) the Humanities and Natural Sciences. If you look at our catalog, you'll see that it's not limited to just those categories. We're each very much interested in whatever the other happens to 'discover', reading or otherwise, although I will admit to getting glassy-eyed with her interest in current-day YA Fiction. Fortunately, she seems to be beyond that phase now.

"Spare time" activities include music, museums, antique stores, coffee shops, rock shops, hiking, and delving into craft-related activities. Diane Setterfield summed us up fairly nicely in her book The Thirteenth Tale -- "In the background is the hiss of the gas heater; we hear the sound without hearing it for, side by side, together and miles apart, we are deep in our books."

(He) -- The Wave Watcher's Companion: From Ocean Waves to Light Waves via Shock Waves, Stadium Waves, and All the Rest of Life's Undulations by Gavin Pretor-Pinney
and --- Brothers: George Howe Colt on His Brothers and Brothers in History by George Howe Colt

(She) -- reads so fast, I'd have to update this almost every day. Genre: YAPR and museum literature.

Some books I have read recently: -- * = Review available
Steering the Craft: Exercises and Discussions on Story Writing for the Lone Navigator or the Mutinous Crew - (Ursula K. Le Guin)
The Violin Maker: Finding a Centuries-Old Tradition in a Brooklyn Workshop - (John Marchese)
First We Read, Then We Write: Emerson on the Creative Process - (Robert D. Richardson)
The Reading Promise: My Father and the Books We Shared - (Alice Ozma)
Falling Star - (Philip Chen)
On Rumors: How Falsehoods Spread, Why We Believe Them, What Can be Done - (Cass R. Sunstein)
Against All Things Ending - (Stephen R. Donaldson)
The Grand Design - (Stephen Hawking and Leonard Mlodinow)
The Godless Constitution: A Moral Defense of the Secular State - (Isaac Kramnick and R. Laurence Moore)
shiver - (Maggie Stiefvater)
The Pleasures of A Bookworm - (J. Rogers Rees)
The Big House: A Century in the Life of an American Summer Home - (George Howe Colt)
Creative Guide to Journal Writing: How to Enrich Your Life With a Written Journal - (Dan Johnson)
* Script and Scribble: The Rise and Fall of Handwriting - (Kitty Burns Florey)
* Note to Self: On Keeping a Journal and Other Dangerous Pursuits - (Samara O'Shea)
* All in Good Time: A Memoir - (Jonathan Schwartz)
* Holidays on Ice - (David Sedaris)
* The Lost Symbol - (Dan Brown)
The Middle Way: Finding Happiness in a World of Extremes - (Lou Marinoff)
Coming of Age:The Story of Our Century by Those Who've Lived It - (Studs Terkel)
* A Short History of Myth - (Karen Armstrong)
* The Strange Orchid - (H.G.Wells)
* Feynman’s Lost Lecture; The Motion of Planets Around the Sun
* What Happened: Inside The Bush White House and Washington's Culture of Deception - (Scott McClellan)
* Almost Home - (Jonathan Schwartz)
* The Little Prince - (Antione de Saint Expery)
* The Discomfort Zone: A Personal History - (Jonathan Franzen)
* The 28 Biggest Writing Blunders (And How to Avoid Them) - (William Noble)
* The Right to Write - (Julia Cameron)
* The Art & Craft of the Short Story - (Rick DeMarinis)
* This I Believe: The Personal Philosophies of Remarkable Men and Women - (Jay Allison, ed.)
* This I Believe II: More Personal Philosophies of Remarkable Men and Women - (Jay Allison, ed.)
* A Walk in the Woods: Rediscovering America on the Appalachian Trail - (Bill Bryson)
* How I Got Published: Famous Authors Tell You in Their Own Words - (Ray White, ed.)
* A Passion for Books: A Book Lover's Treasury of Stories, Essays, Humor, Love and Lists on Collecting, Reading, Borrowing, Lending, Caring for, and Appreciating Books - (Harold Rabinowitz)
* On Writing: A Memoir of the Craft - (Stephen King)
* Great Feuds In Science: Ten Disputes That Shaped the World - (Hal Hellman)
* A Great and Godly Adventure: The Pilgrims and the Myth of the First Thanksgiving - (Godfrey Hodgson)
* Retained by the People: The "Silent" Ninth Amendment and the Constitutional Rights Americans Don't Know They Have - (Dan Farber)
* How to Read a Book - (Mortimer Adler)
* The Art of Reading Poetry - (Harold Bloom)
* The Trouble with Poetry: And Other Poems - (Billy Collins)
* Cavender's House - (Edwin Arlington Robinson)
Harry Potter and the Deathly Hallows - (J.K. Rowling)
How to Read a Novel - (John Sutherland)
* The Child that Books Built - (Francis Spufford)
* A Princess of Mars - (Edgar Rice Burroughs)
* Mr. Brisher's Treasure - (H.G. Wells)
Fatal Revenant - (Stephen R.Donaldson)
The Runes of Earth - (Stephen R.Donaldson)
In the Stacks - (Michael Cart, ed.)
46 Pages - (Scott Liell)
Missionary Position - (Christopher Hitchens)
The Elements of Editing: A Modern Guide for Editors and Journalists - (Arthur Plotnik)
god is NOT Great - (Christopher Hitchens)
You Can't Read This: Forbidden Books, Lost Writing, Mistranslations, and Codes - (Val Ross)
American Bookplates - (William E. Butler)
84 Charing Cross Road - (Helene Hanff)
At Large and At Small: Familiar Essays - (Anne Fadiman)
* Ex Libris: Confessions of a Common Reader - (Anne Fadiman)
* Quiet, Please: Dispatches from a Public Librarian - (Scott Douglass)
* Evolution of the Gods: Exploring the Myths of Religion
The Laws of Simplicity - (John Maeda)
The Word Museum: The Most Remarkable English Words Ever Forgotten - (Jeffrey Kacirk)
Book By Book: Notes on Reading and Life - (Michael Dirda)
Used and Rare: Travels in the Book World - (Lawrence and Nancy Goldstone)
* Chauvet Cave: The Art of Earliest Times - (Jean Clottes) -- MrsHouseLibrary read and reviewed this one.

About my libraryThe name says it all! My wife and I have bookshelves in every room of our house -- two stories (the house, I mean), four bedrooms, LR, DR, Kitchen. A while back, we added six large bookshelves, and it took us a mere year and a half to fill them. We also got an additional nine smaller bookcases when we took possession of about half of WholeHouseFather-in-Law's library after he died. That added another 450+ books to our library. The other half of his collection was divided between the WholeHouseSisters-in-Law or given to Goodwill. We've bought a LOT of books since then; I designed corner bookcase to fit over my desk. It's already mostly full of reference books for when I write. The other plus of it is we have room for more books again. It's a Win/Win situation!

She's now complaining that her favorite set of books are spread out over four shelves in two bookcases in the same room. My favorite genre (Books about Books) is in four different rooms. So, Dewey is kind of a bust, but before we go to some other system, we're going to take pictures.

We're currently converting our spreadsheet version of the book catalog to follow the standards of the Bisac system - which is what most bookstores use. Eventually, we will have to rearrange all of the physical books again, but it will be a while yet. I ~LOVE~ projects like this!

Ask us about the Library Hotel sometime.

Currently readingThe Wave Watcher's Companion: From Ocean Waves to Light Waves via Shock Waves, Stadium Waves, and All the Rest of Life's Undulations by Gavin Pretor-Pinney
The Cellist of Sarajevo by Steven Galloway
Now and Forever by Ray Bradbury
Something Wicked This Way Comes by Ray Bradbury
Brothers: George Howe Colt on His Brothers and Brothers in History by George Howe Colt
The game : Harvard, Yale, and America in 1968 by George Howe Colt
The Dilsberg Engagement: Love, Dissent and Reprisals by Danielle Jaussaud