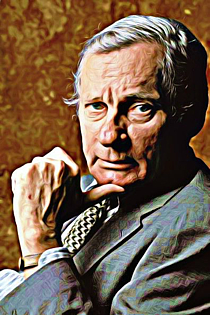 About meWilliam Gaddis (1922-1998) published his first novel, The Recognitions, in 1955, a behemoth of a debut at almost 1000 pages that he'd begun in 1947. When the novel fell largely on deaf and especially dumb critical ears, Gaddis, who'd envisioned a similar blockbuster reception for it that would've allowed him to write full time as was awarded Ralph Ellison with his first novel, Invisible Man, instead worked as a speechwriter and documentary filmmaker for various companies, including Pfizer International, Eastman Kodak, and IBM, to support his family.

After publishing The Recognitions, Gaddis labored for two decades in obscurity in the business world, observing corporate and capitalist shenanigans up close. What he witnessed, combined with his deep and abiding disappointment over the apathetic response critics gave his first novel (now considered a masterpiece and one of the greatest novels of the 20th century), further fueled his artistic ambitions and motivated him to write his scathing, National Book Award winning follow up, JR (1975), that skewered capitalism like few novels ever have, before or since, with its unrelenting dialogue. Critics were initially mixed in their reviews of JR; nevertheless, Gaddis finally enjoyed some positive appraisals of his work he arguably should've enjoyed twenty years previously for The Recognitions -- a novel soon rediscovered and given the proper recognition it had long deserved in what was the then lingering afterglow of JRs success. (Watch a young man discuss JR here.)

Gaddis would publish two more novels over the next twenty years, 1985s Carpenter's Gothic, his most accessible novel to date and a PEN/Faulkner Award nominee (watch Malcolm Bradbury's interview with William Gaddis in 1986 here); and A Frolic of His Own (1994), his second novel to win the National Book Award, a tome in which Gaddis mocked the legal world and the United State's obsessively litigious culture in the same manner -- with pure non stop spot on barrages of dialogue -- that he levied at U.S. capitalism run amok in JR.

Agapē Agape, an early work left unfinished in the 1950s, was resurrected by Gaddis forty years later following the success of A Frolic of His Own, and became his final novel, completed only weeks before he died. It was published posthumously in 2002, along with The Rush for 2nd Place: Essays & Occasional Writings.

About my libraryLibrary being compiled initially from the 1,243 volumes itemized in Washington University's, The William Gaddis Papers.