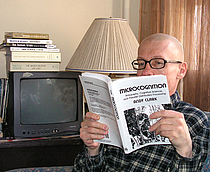 About meThere are a lot of people on-line who call themselves "eternal students". Most of them are frustrated grad students, struggling to finish their dissertations and get out into the real world. It's been a long, long time since I've been a grad student. But I still love the process of reading and learning, so I also call myself an "eternal student".

I'm a 50+ year old government bureaucrat who failed at marriage and never raised a family. I guess that it just wasn't in me. I don't hang out at bars and restaurants as much as I used to (ah, days of youth). But I still like to write, so I have some pen-pals (today it's mostly e-mail pals). And I do have my books -- mostly non-fiction. I read to learn; learning is my entertainment. All the emotional stuff that you get from novels and TV and movies and real life comes in second, in my book.

Am I an Aspie? Maybe a little bit. Many of my books reflect typical Aspie interests. On the Enneagram, I'm a type 5 -- yep, definite Aspie territory. But Myers-Briggs sez that I'm an INFJ. A guy with a heart. Do I care about humankind, despite feeling as though I've been dropped on the wrong planet? Perhaps. I did spend 10 years working for a non-profit community development agency in a poor urban town, after volunteering with them for 2 years. I still like it when human beings get along, and I do what I can to help them with that.

So I'm sometimes a techie and sometimes a humanist. Maybe I was once even an idealist. I'm a vegetarian, for health and social reasons (and like to cook too, which comes in handy when you don't eat what everyone else wants to eat). I enjoy working with computers. I have absolutely no athletic ability and hardly know anything about sports. But I do get some running and exercising in, as to maintain and respect my own body. I have almost no artistic talents, although I do OK with a camera (a digital camera, of course; although I miss my old Pentax SLR's). Some days I'm a truly nice guy, and some days I'm moody and crabby. I have something of a sense of humor, but most people don’t pick up on it. As to religion and faith, I was once a Roman Catholic, but the books about the historical Jesus convinced me that 'The Risen Christ' is a confluence of Greco-Roman myth and Middle-Eastern myth. So now I'm nothing. Truly nothing. Even more nothing than the Buddha. Although I still believe in God. OK, so maybe I am something. But I have no idea what that is. (So I'm nowhere; but as Napoleon Solo said on 'Man from Uncle', then I am somewhere.)

Do I like music? Yea, but not enough to buy a book about it. I can't say that there's any musician or musical genre out there that I favor. I find the songs that I like where I may. I can hardly stand to listen to a whole album from any one artist, or for any one style of music. (Only big exceptions were the first three albums from Asia, back in the early 80s). Maybe one or two songs will hit me, and the rest will just waste my time. Take the Mamas and the Papas, for instance. I had no interest in their music back in the late 60s. But then Cass Elliot put out a beautiful song that just said it all for me. The refrain is one of the best pieces of philosophy I've ever heard: "You've got to make your own kind of music, sing your own special song; make your own kind of music, even if nobody else sings along".

My big interest right now is on the topic of human consciousness, the interaction between brain and mind, science and subjectivity. But some other recent intellectual dabblings have included the history of the Roman Empire and the portrait of Jesus of Nazareth that has emerged from "the third quest" for the historical Jesus. You'll see some books about that. Oh, and Thomas Merton and his fellow monks. I'm not a Catholic or a Buddhist, but I admire their monastic traditions. Guess that I'm a monk (or maybe a hermit) at heart.

Well, check out my library. It will tell you a lot about me.

About my libraryIt's almost all non-fiction, other than a couple of Tom Clancy-ish tales.

Consciousness
Thomas Merton and Monasticism
The Historical Jesus, his life and times
The Roman Empire
Modern History
Vegetarian Cooking
Frank Gannon (my favorite humorist)
Railroads
Quantum Physics
Other Techie-Geek Stuff
Urban Poverty and Social Policy
Calvin and Hobbes
American Politics
And anything else that interests me .....