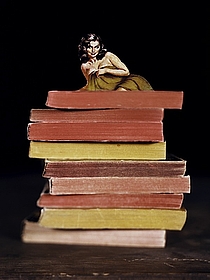 About meI teach high school English, juniors and seniors. I have four children ranging from college age to kindergarten. I don't remember ever not knowing how to read as I have always done so. My dream job would be to get paid to read books. I probably would be expected to write something about them afterward, and I am willing to do that too. If you know where I can find said job, please do let me know.

About my libraryMy library is primarily fiction. I love historical smut. I love psychological thrillers as well as rambling, wistful tales. These past few years I have been working on broadening my horizons by reading books set in more varied countries. It has been enlightening indeed.

I wish my library was as varied as it is extensive. I have books from one end of my house to the other. I have books in every corner of my classroom. At any given moment, I probably have half a dozen books in my car. I always carry a book in my purse. If I never bought another book again, I probably would not run out of reading material before I died. Of course, that won't be happening.

I am currently reading: 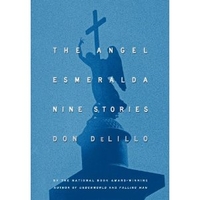 2012 Reads, so far:
Jitterbug Perfume by Tom Robbins
The Holy Bible
Their Eyes Were Watching God by Zora Neale Hurston
The Curious Incident of the Dog in the Night-Time by Mark Haddon
Night by Elie Weisel
Cloud Atlas by David Mitchell
Freakanomics by Steven D. Levitt and Stephen J. Dubner
2666 by Roberto Bolano
Slaughterhouse Five by Kurt Vonnegut
1Q84 by Haruki Murakami
Columbine by Dave Cullen
In Cold Blood by Truman Capote
Luminarium by Alex Shakar
The Golden Mean by Annabel Lyon
The Song of Achilles by Madeline Miller
Popol Vuh by Dennis Tedlock (translator)
Monkey by Wu Ch'eng-en
Moby Dick by Herman Melville
Paradise Lost by John Milton
The Divine Comedy by Dante
The Mwindo Epic
The Epic of Gilgamesh
Theogony and Works and Days by Hesiod
The Aeneid by Virgil
The Odyssey by Homer (reread)
The Iliad by Homer (reread)
The Night Circus by Erin Morgenstern
Of Mice and Men by John Steinbeck (reread)
The American Way of Eating by Tracie McMillan
East of Eden by John Steinbeck (reread)
The Marriage Plot by Jeffrey Eugenides
Lost Memory of Skin by Russell Banks
Anil's Ghost by Michael Ondaatje
Extremely Loud and Incredibly Close by Jonathan Safran Foer
The Omnivore's Dilemma by Michael Pollan
The Poison Tree by Erin Kelly
Hunger Games by Suzanne Collins
Thank You for Smoking by Christopher Buckley
Things Fall Apart by Chinua Achebe
Ender's Game by Orson Scott Card
The Sense of an Ending by Julian Barnes
The Lonely Polygamist by Brady Udall

2011 Reads
The Reader by Bernhard Schlink
The Graduate by Charles Webb
Emerald City by Jennifer Egan
The Commitments by Roddy Doyle
Bright's Passage by Josh Ritter
Ablutions by Patrick deWitt
Ed King by David Guterson
Wind Up Bird Chronicle by Haruki Murakami (reread)
This Burns My Heart by Samuel Park
Water for Elephants by Sara Gruen
Cleaning Nabokov's House by Leslie Daniels
Life of Pi by Yann Martel
The Vagrants by Yiyun Li
Mr. Peanut by Adam Ross
Little Bee by Chris Cleave
The Devotion of Suspect X by Keigo Higashino
Everything is Illuminated by Jonathan Safran Foer
The Snowman by Jo Nesbo
In Zanesville by Jo Ann Beard
Vaclav & Lena by Haley Tanner
Almost Transparent Blue by Ryu Murakami
The Name of the Rose by Umberto Eco
Virgin Suicides by Jeffrey Eugenides
A Visit from the Goon Squad by Jennifer Egan
At Swim Two Birds by Flann O'Brien
A Month in the Country by J.L. Carr
Ilustrado by Miguel Syjuco
Lorna Doone by. R.D. Blackmore
Anthropology of an American Girl by Hilary Thayer Hamann
Farewell to Manzanar by Jeanne Wakatsuki and James D. Houston
Cold Comfort Farm by Stella Gibbons
True Grit by Charles Portis
Memento Mori by Muriel Spark
South of the Border, West of the Sun by Haruki Murakami
The Particular Sadness of Lemon Cake by Aimee Bender
The Quiet American by Graham Greene
Invisible Bridge by Julie Orringer
Felicia's Journey by William Trevor
Freedom by Jonathan Franzen
Great House by Nicole Krauss
Breakfast at Tiffany's by Truman Capote
Child 44 by Tom Rob Smith
The Help by Kathryn Stockett
Lady Chatterley's Lover by D.H. Lawrence

2010 Reads
Sunset Park by Paul Auster
The Death and Life of Charlie St. Cloud by Ben Sherwood
Ham on Rye by Charles Bukowski
Schindler's Ark by Thomas Keneally
One Good Turn by Kate Atkinson
How to Read the Air by Dinaw Mengestu
Disgrace by J.M. Coetzee
The Glass Room by Simon Mawer
Silk by Alessandro Baricco
Revolutionary Road by Richard Yates
Five Quarters of the Orange by Joanne Harris
About a Boy by Nick Hornby
The Namesake by Jhumpa Lahiri
Regeneration by Pat Barker
In the Country of Men by Hisham Matar
Squirrel Seeks Chipmunk by David Sedaris
The Beautiful Things That Heaven Bears by Dinaw Mengestu
Reservation Road by John Burnham Schwartz
The Taming of the Shrew by William Shakespeare
A Pale View of the Hills by Kazuo Ishiguro
The Confessions of Edward Day by Valerie Martin
Bonjour Tristesse by Francoise Sagan
The Last Picture Show by Larry McMurtry
One Amazing Thing by Chitra Banerjee Divakaruni
Coming Through Slaughter by Michael Ondaatje
What's the Big Idea? by Jim Burke
Mathilda Savitch by Victor Lodato
The Things They Carried by Tim O'Brien
Little Stranger by Sarah Waters
A Town Like Alice by Nevil Shute
The Stepford Wives by Ira Levin
Election by Tom Perrotta
Fear and Trembling by Ameilie Nothomb
The Girl Who Kicked the Hornet's Nest by Stieg Larsson
Shadow Tag by Louise Erdrich
The Surrendered by Chang-Rae Lee
Solar by Ian McEwan
Let the Great World Spin by Colum McCann
The Girl Who Played with Fire by Stieg Larsson
Cockroach by Rawi Hage
A Long Way Gone by Ishmael Beah
Haiku by Andrew Vachss
Chronic City by Jonathan Lethem
Slumberland by Paul Beatty
Juliet, Naked by Nick Hornby
Sarah's Key by Tatiana de Rosnay
Everything Ravaged, Everything Burned by Wells Tower
Cutting for Stone by Abraham Verghese
This is How by M.J. Hyland

2009 Reads:
The Sound of Building Coffins by Louis Maistros
Wolf Hall by Hilary Mantel
In Other Rooms, Other Wonders by Daniyal Mueenuddin
Every Man Dies Alone by Hans Fallada
Nocturnes by Kazuo Ishiguro
Her Fearful Symmetry by Audrey Niffenegger
Invisible by Paul Auster
The Scenic Route by Binnie Kirshenbaum
A Girl Made of Dust by Nathalie Abi-Ezzi
Censoring an Iranian Love Story by Shahriar Mandanipour
Await Your Reply by Dan Chaon
Love and Summer by William Trevor
That Old Cape Magic by Richard Russo
City of Thieves by David Benioff
Inherent Vice by Thomas Pynchon
The Hour I First Believed by Wally Lamb
Zeitoun by Dave Eggers
The Girl with the Dragon Tattoo by Stieg Larsson
Middlesex by Jeffrey Eugenides
The Sparrow by Mary Doria Russell
Last Night at the Lobster by Stewart O'Nan
Say You're One of Them by Uwem Akpan
The Cement Garden by Ian McEwan
The Alchemist by Paulo Coehlo
Passage to India by E.M. Forster
Grotesque by Natsuo Kirino
An Artist of the Floating World by Kazuo Ishiguro
Out by Natsuo Kirino
Never Let Me Go by Kazuo Ishiguro
The Angel's Game by Carlos Ruiz Zafon
Shadow of the Wind by Carlos Ruiz Zafon
Kafka on the Shore by Haruki Murakami
After Dark by Haruki Murakami
When You Are Engulfed in Flames by David Sedaris
The Way through Doors by Jesse Ball
The Electric Kool-Aid Acid Test by Tom Wolfe
Guernica by Dave Boling
A Case of Exploding Mangoes by Mohammed Hanif
The Believers by Zoe Heller
Nazi Literature in the Americas by Roberto Bolano
Bastard out of Carolina by Dorothy Allison
What Happened to Anna K by Irina Reyn
The Diving Pool by Yoko Ogawa
Breath by Tim Winton
The Sorrows of an American by Siri Hustvedt

No Country for Old Men by Cormac McCarthy
Girls of Riyadh by Rajaa Alsanea
The Quiet Girl by Peter Hoeg
Sputnik Sweetheart by Haruki Murakami
To Kill a Mockingbird by Harper Lee
Tree of Smoke by Denis Johnson
An Invisible Sign of My Own by Aimee Bender
Cheating at Canasta by William Trevor
Of Mice and Men by John Steinbeck
The Reserve by Russell Banks
Soul Thief by Charles Baxter
Carry Me Down by M.J. Hyland
Up at the Villa by W. Somerset Maugham
White Noise by Don DeLillo
Hard-Boiled Wonderland and the End of the World by Haruki Murakami
Beautiful Children by Charles Bock
The Match by Romesh Gunesekera
Christine Falls by Benjamin Black
Beginner's Greek by James Collins
Loving Frank by Nancy Horan
An Uncommon Reader by Alan Bennett
The Painted Veil by W. Somerset Maugham
A Father's Law by Richard Wright
Don't Get Too Comfortable by David Rakoff
The Savage Detectives by Roberto Bolano
Johnny One-Eye by Jerome Charyn
Darkmans by Nicola Barker
The Age of American Unreason by Susan Jacoby
The Plague of Doves by Louise Erdrich
So Brave, Young, and Handsome by Leif Enger
Last Evenings on Earth by Roberto Bolano
Bonk: The Curious Coupling of Sex and Science by Mary Roach
Maus - A Survivor's Tale: My Father Bleeds History by Art Spiegelman
The Lace Reader by Brunonia Barry
Dear American Airlines by Jonathan Miles
Signed, Mata Hari by Yannick Murphy
The Gargoyle by Andrew Davidson
A Wolf at the Table by Augusten Burroughs
Maus - A Survivor's Tale: And Here My Troubles Began by Art Speigelman
Trespass by Valerie Martin
A Man in the Dark by Paul Auster
The Sex Lives of Cannibals by J. Maarten Troost
Alfred and Emily by Doris Lessing
Finding Nouf by Zoe Ferraris
The 19th Wife by David Ebershoff
The Cellist of Sarajevo by Steven Galloway
An Exact Replica of a Figment of My Imagination by Elizabeth McCracken
Downtown Owl by Chuck Klosterman
The Lazarus Project by Aleksandar Hemon
To Siberia by Per Petterson
The Implacable Order of Things by Jose Luis Peixoto
A Mercy by Toni Morrison
Sea of Poppies by Amitav Ghosh
Indignation by Philip Roth
Whiskey Rebels by David Liss

Groups1001 Books to read before you die, 40-Something Library Thingers, Algonquin Readers Round Table, And Other Stories, Ebook, Fans of Russian authors, Infinite Jesters, Literary Snobs, New York Review Books, Reading Globally —show all groups, Teachers who LibraryThing, The English Department, The Prizes, Tropic of Ideas, What Are You Reading Now?