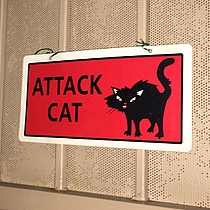 I read and write about the Middle East for a living and, though I love what I do, I work too much and am trying to develop some hobbies that don't use exactly the same muscles (literally and figuratively) as my job. I want to be a better gardner and a more creative cook; I like making cocktail bitters. I embrace my cat-lady-ness & am the proud parent of four little scamps who think books make great sleeping spots and chewing material.

I'm a bit of a dilettante - I love to learn new things and every book I read spurs in me the desire to read a whole different subset of (possibly unrelated) books. I'm a religious reader of good articles online & enjoy a good history podcast during my daily commute.

And yes, I do love Mansfield Park. I first read it at a time when Fanny's refusal to compromise her morals and just "be cool" really resonated with me. Subsequent reads and critical analysis of the book have complicated the identification, but the name sticks.

After years of reading primarily non-fiction, I now read a lot of detective novels & domestic suspense for distraction when my brain is fried -- they all tend to run together after a while. While I don't tend to track strictly work-related reading here, you'll probably see some books on the Middle East, sectarian violence, and other uplifting topics.

I spent my adolescence as an aspiring Kremlinologist. Other random obsessions include language and linguistics, polar exploration, WW1, social histories, dystopias/speculative fiction, and England. I collect children's books and am especially fond of the New York Review of Books Children's Collection.

Many of my books are now ebooks. I generally don't worry about entering the proper data to reflect that, though I do use the Collections function to note ebooks.

My rating system is fairly inconsistent. My feelings about books are very much tied up in how I was feeling when I read them, why I was reading them at the time, what I expected vs. what I got, etc. I hate giving up on a book that is "ok". The ending of a book can make or break my entire experience and disproportionately affect the rating.

I used to review a lot, but work intervened. In 2018, I'd like be better about at least jotting down a few thoughts to aid my memory. The nature of my reviews varies widely based on what I wrote the review for – books read in grad school get a very different treatment than books read now, since I’m reading for fun rather than for critical analysis.

From 2007 through 2014, I was mostly good about tracking my reading and reflecting on it in the Club Read Group for each year. Since 2014, I've relied on the "Collections" function and haven't had a thread or been a group participant in any meaningful way.

Currently readingHigh Lonesome: New and Selected Stories 1966-2006 by Joyce Carol Oates
Catastrophe 1914: Europe Goes to War by Max Hastings
The Politics of Sectarianism in Postwar Lebanon by Bassel Salloukh
Lebanon: After the Cedar Revolution by Are Knudsen
Alexander Hamilton by Ron Chernow
The Arab of the Future: A Childhood in the Middle East, 1978-1984: A Graphic Memoir by Riad Sattouf
Rebellion: The History of England from James I to the Glorious Revolution by Peter Ackroyd
Pax Syriana: Elite Politics in Postwar Lebanon (Modern Intellectual and Political History of the Middle East) by Rola El-Husseini
The Plant Lover's Guide to Ferns (The Plant Lover’s Guides) by Sue Olsen
Flower Color Guide by Darroch Putnam
Lebanon after the Syrian Withdrawal by Ohannes Geukjian