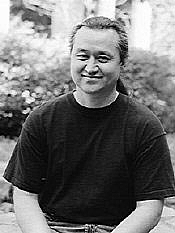 About meI've been writing online about the things that interest me since about 1995 (back then I had 10 MB of free webspace on my internet provider) - I purchased my first domain, wildtoys.com in 1998, however the site actually started as part of my personal webspace via free provider around 1996. I'm very interested in Modern Design (Mid-Century is a particular favorite), the Space Race, movies and science fiction. I'm also an avid woodworker.

About my libraryI read mostly Science Fiction and Fantasy but am more into the science side (I find that a lot of the fantasy work currently being published is too repetitive and derivative). I started collecting comics as a kid and when I got into reading a lot of fiction, collecting First Editions, especially Illustrated Editions, seemed a natural extension. At several points I've wittled down the comic collection (it's mostly comprised of magazines and my original Marvel Conan the Barbarian collection which I started as a child) and have concentrated on the books from authors I like to read. I also collect books illustrated by artists I like. I often like to go to book signings or attend conventions where I get signatures from my favorite authors and artists, and occasionally ask or pay for personalized illustrations and sketches (provided the artist isn't swamped - I try not to be overzelous and obnoxious).

I'm also into classic science fiction paperback books like those produced by Ace, DAW and Lancer - it was the cover art that lured me into picking up those, and the memory of my father reading them brings in a touch of nostalgia that's rather addicting. This also enamoured me to old "cheezy" book covers so I've got a scattering of those in paperback as well (in general the writing is pretty bad - look up "sex kitten" in my library to see an example of what I'm referring to).

The collection is fairly extensive - so far I've inventoried about 93% (I'd say about 95% of the hardcovers and about 90% of the paperbacks). The letter-number combinations in my tagging relate to boxes where the books are currently stored - tags without the letter-number combo are on the shelf.

Other favoritesThe Georgia Museum of Art