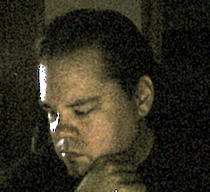 About meI am what I am

About my libraryIt is what it is.

If you see a rating, that means I've read the book. If you don't see a rating, that means either I haven't read it yet or don't remember it well enough to rate it...which means I should probably read it again. All the books listed here are on my shelves, however...and a few are sitting on the floor, 'cause I have no more room on the shelves. But does that stop me from buying more? Nooooooooo.

Regarding tags, I make some distinctions with tags that may not be very common. Alternate history denotes fictional stories in an alternate history. Alternative history contains books that offer an alternative version of history on this earth using facts and speculation that orthodox historians either don't or won't take into account. Likewise, supernatural refers to fictional works and creatures while paranormal refers to things that are being studied in our world, usually consisting of things that leave evidence such as ghosts, UFOs, and cryptozoological creatures.

Currently readingFeminism in the Worlds of Neil Gaiman: Essays on the Comics, Poetry and Prose by Tara Prescott
The Anatomy of Story: 22 Steps to Becoming a Master Storyteller by John Truby
Ghostly Tales: Spine-Chilling Stories of the Victorian Age by Various