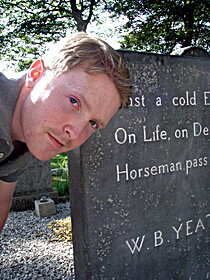 About meMick from Massachusetts. Grew up right outside Boston. Went to college in the city. Worldview is a shifting triangulation of tragicomic observer, pragmatist, and Romantic. Gets much too angry and passionate about aesthetic and literary debates. Finds a great deal of postmodern literary theory to be meretricious garbage. Would like to be passionate about American politics, but thinks the situation and intellectual climate are pretty ludicrous. Has traversed a not-unremarkable swath of western Europe, as well as Morocco. Been only to Montreal and Quebec in Canada. Was in Mexico once, but it was a bro-tastic, drunken haze. Speaks Spanish. Wants to learn French next. Mildly (or not so, on occasion) obsessed with: Boston; Buenos Aires; Catalonia and Catalan; Gnosticism; India; Ireland; the music of Bright Eyes; mystical strands of Judaism; New York City; Spain. Has literary aspirations.

About my libraryPerhaps I err too heavily toward Dead White Males, the canon, and Harold Bloom, but I find much of what is touted as ground-breaking and avant-garde is too clever for its own good and quite tiresome. If liking the best and constantly trying to figure out what defines it is elitism (Let's not forget why Oscar Wilde's taste was simple.), then I am an elitist--but only in this sense (social elitism a la WASPs and JAPs being deplorable).