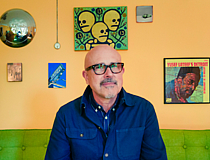 About meMichael Zadoorian is the author of five works of fiction. His second novel, The Leisure Seeker was recently made into a feature film starring Helen Mirren and Donald Sutherland.

Coming in May 2020 is The Narcissism of Small Differences. Set in bottomed-out 2009 Detroit, it’s the story of Joe Keen and Ana Urbanek, an unmarried Gen X couple with no kids or mortgage, as Midwestern parents seem to require. Now on the cusp of forty, both work at jobs that they’re not sure they believe in anymore, yet with varying returns. Ana is successful, Joe is floundering—both caught somewhere between mainstream and alternative culture, sincerity and irony, achievement and arrested development. The Narcissism of Small Differences tells of an aging creative class, doomed to ask the questions: Is it possible to outgrow irony? Does not having children make you one? Is there even such a thing as selling out anymore? By turns wry and ribald, kitschy and gritty, poignant and thoughtful, The Narcissism of Small Differences is the story of Joe and Ana’s life together, their relationship, their tribes, their work and passions, and their comic quest for a life that is their own and no one else’s.

His latest novel BEAUTIFUL MUSIC is about one young man’s transformation through music. Set in 1970’s era Detroit, Danny Yzemski is a husky, pop radio–loving loner balancing a dysfunctional home life with the sudden harsh realities of freshman year at a high school marked by racial turbulence. When tragedy strikes the family, Danny’s mother becomes increasingly erratic and angry about the seismic cultural shifts unfolding in her city and the world. As she tries to keep it together with the help of Librium, highballs, and breakfast cereal, Danny finds his own reason to carry on: rock ‘n’ roll. BEAUTIFUL MUSIC is a funny and poignant story about the power of music and its ability to save one’s soul.

Zadoorian’s second novel THE LEISURE SEEKER was an international bestseller and translated into over 20 different languages worldwide. John and Ella, two eighty-somethings decide to kidnap themselves from the doctors and grown children who run their lives for a final adventure in their ancient Winnebago. The book garnered rave reviews from all over the world. In a starred review, Booklist wrote "THE LEISURE SEEKER is pretty much like life itself: joyous, painful, moving, tragic, mysterious, and not to be missed." The L.A. Times said: Zadoorian is true to these geezers. He draws them in their most honest light. I hoped for a book that would make me laugh during these tight times, and I was rewarded." And the Sydney Morning Herald stated: "This is a sad, sweet love letter to a fading America… sharp humour about aging and a quietly shocking ending.”

Michael Zadoorian's first novel SECOND HAND is about love and loss for a Detroit-area junk store owner. The New York Times Book Review said “SECOND HAND may be a gift from the (Tiki) gods” ..."a romantic adventure that explores what Yeats called 'the foul rag and bone shop of the heart.'" Selected for Barnes & Noble's Discover Great New Writers Program and the American Booksellers Association Book Sense program, Second Hand also received the Great Lakes Colleges Association prestigious New Writers Award. Translated into Italian, French and Portuguese, it continues to be a cult favorite, still popping up on blogs and "favorite book" lists.

His short story collection THE LOST TIKI PALACES OF DETROIT follows characters coming to terms with the past and the present in a broken city. Lansing State Journal said: "…stories that grab you, shake you and slap you upside the head." The Ann Arbor Observer called the stories “sometimes wildly funny and more than a little crazy, yet they have a heart-breaking affection for the battered lives they portray.”

Zadoorian has worked as a copywriter, journalist, voice over talent, shipping room clerk, and a plant guard for Chrysler. He is the recipient of a Kresge Artist Fellowship in the Literary Arts, the Columbia University Anahid Literary Award, the Great Lakes Colleges Association New Writers Award, the GLIBA Great Lakes Great Reads award, and the Michigan Notable Book Award. His writing has appeared in the The Literary Review, Beloit Fiction Journal, American Short Fiction, Witness, Great Lakes Review, The North American Review and the Huffington Post. A lifetime resident of the Detroit area, he lives with his wife in a 1937 bungalow filled with cats and objects that used to be in the houses of other people.