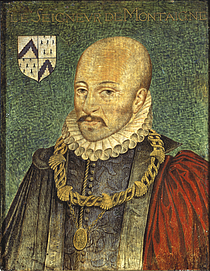 About meMichel Eyquem de Montaigne (1533-1592) was one of the most influential writers of the French Renaissance, known for popularizing the essay as a literary genre and is popularly thought of as the father of Modern Skepticism. He became famous for his effortless ability to merge serious intellectual speculation with casual anecdotes and autobiography—and his massive volume Essais contains, to this day, some of the most widely influential essays ever written. (from Wikipedia)

This is probably only a little part of the real Montaigne library, as he cite other authors in the essai not listed here because we don't know witch book of them he have. We also not have listed the books than we are not sure he may have read.

Montaigne itself may have inherited the Étienne de La Boétie books.