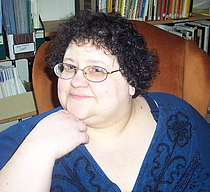 About meIf you see a book in my collection that I have not reviewed please feel free to ask me about it.

My Favorite Quotes About Books
"Books to the ceiling,
Books to the sky,
My pile of books is a mile high.
How I love them! How I need them!
I'll have a long beard by the time I read them."
~ Arnold Lobel

"If you cannot read all your books, at any rate handle, or as it were, fondle them - peer into them, let them fall open where they will, read from the first sentence that arrests the eye, set them back on the shelves with your own hands, arrange them on your own plan so that you at least know where they are. Let them be your friends; let them at any rate be your acquaintances." - Winston Churchill

"The man who does not read good books has no advantage over the man who can't read them." -Mark Twain

"Sir, the fact that a book is in the public library brings no comfort. Books are one element in which I am personally and nakedly acquisitive. If it weren't for the law I would steal them. If it weren't for my purse I would buy them." - Harold Laski

"When I get a little money, I buy books; and if any is left, I buy food and clothes." - Desiderius Erasmus

"There is a great deal of difference between an eager man who wants to read a book and a tired man who wants a book to read." - G.K. Chesterton

"Someone who spent his life living rough under the sky knew the value of a good thick book, which ought to outlast at least a season of cooking fires if you were careful how you tore the pages out. Many a life had been saved on a snowy night by a handful of sodden kindling and a really dry book. If you felt like a smoke and couldn't find a pipe, a book was your man every time. Cohen realized people wrote things in books. It had always seemed to him to be a frivolous waste of paper." - Terry Pratchett, "The Light Fantastic", p 137 Currently readingLost Scriptures: Books that did not make it into the New Testament by Bart D Ehrman
The Lost Christianities: The Battles for Scripture and the Faiths We Never Knew by Bart D. Ehrman
A People's History of the United States: 1492-Present (Perennial Classics) by Howard Zinn
The Year's Best Dark Fantasy & Horror 2010 by Paula Guran