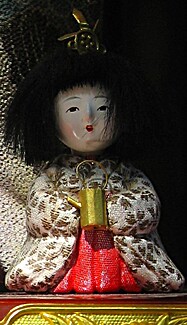 About meThe photo illustrating this library depicts a Japanese doll, seen in the storefront window of a Japanese import store in Greenwich Village, NYC. Here it is meant to depict one of the Japanese women poets, perhaps, a very young Murasaki Shikibu, "the purple lady," who wrote the Tale of Genji, composed beginning about 1000-1012 CE, and which is packed with superb waka poetry.

About my libraryThe Japanese Poets Library was assembled in fact while studying Japanese women poets, and so there is a slant there, but a full range of Japanese poetry collections needed to be consulted, since for the most part the women were published alongside their male colleagues. Nevertheless, there are also included here a number of monographs on women poets, for instance, Ono no Komachi, Murasaki Shikibu, Sei Shonagon, Princess Senshi, Princess Shikishi, Chiyo-ni, Otagaki Rengetsu and others.

Additional related topics in the library include a number of books on Japanese art and design, Zen, Shin Buddhism, Taoism and Shinto, the tea ceremony, Chinese or Korean women poets -- these were purchased to add spirituality, depth and diversity, or for the purpose of comparison.

There are not a lot of books books being added to LibraryThing which duplicate books in this library, most of which have long been out of print (though easily available used at Amazon). But never mind, the way least travelled is sometimes the most delightful!