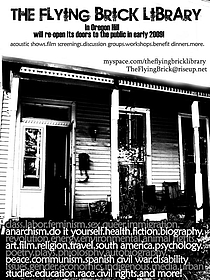 About me
A Short History of the Flying Brick Library! By Greg Wells

The late 90's in Richmond was a hotbed for anarchist and anarchist organizing
in the city. One of the foremost groups was the General Strike Collective.
General Strike began when a handful of Virginia Beach area anarchists and
radicals moved to the Richmond area and within a year formed the collective.
Within time new members joined the collective which through its history
varied in size from a small handful to perhaps a dozen or so core members in
later periods.

The group organized around a myriad of issues including but not limited to:
homelessness and poverty, police brutality, prisoner-support, anti-war,
anti-death penalty and often organized in solidarity with groups such as
Richmond Food Not Bombs, the Lesbian Avengers, Little Flower Catholic Worker
and A.S.W.A.N., a local homeless organization. Beyond protest culture, the
group focused heavily on program-based organizing. The two longest-running
and most successful programs were a weekly labor pool feeding program to aid
and support low-income Richmond workers and the production of a quarterly
newsletter dealing with local, national and international political and
social struggles and issues.

The group never had an official headquarters or office of any kind, therefore
the collective conducted its regular meetings and carried out programs and
events in members' homes. The primary home where the majority of all of this
happened was the house where some of the originators of the collective lived
at the intersection of Cary and Rowland streets, on the edge of the Fan, but
seemingly a million miles from it at that time. One of the last initiatives
that the collective began to undertake before it disbanded was the formation
of a small, radical lending library that housed books, zines and pamphlets
with a decidedly anti-capitalist bent. This was begun around the end of 1998,
at a time when the collective was at its strongest.

General Strike disbanded in June, 1999, the same month that 6 anarchists
formed Richmond's first modern-day anarchist collective house in a large,
Oregon Hill home at 325 south Cherry Street. Of the six residents who formed
that house, four (Yvonne, Greg Will, RJ and myself) were members of General
Strike at its end. With the formation of the house we specifically wanted to
create it as an incubator of sorts where radicals and organizers could
utilize our house for events, meetings, etc. We decided even before we moved
in that we would take over the old General Strike library and dedicate a
sizable room, albeit a second-floor one, in our new home to house and expand
the library. Indeed it did expand greatly as all six household members
dumped their rather large, personal book and zine collections into the mix,
pushing the collection to several hundred books.

With a better suited area for the library we opened it took the public and
neighborhood as a place to come and checkout books and titles that you
otherwise would not find in Richmond. There was now a varied collection that
included: queer and gender issues and politics, global insurrections and
revolutions, urban studies and planning, contemporary and historical
anarchist and anti-capitalist struggles, classic and independent fiction and
literature, local history books and much more. It was also at this point
that we wove into the library the beginnings of a much larger periodical and
archives section. The periodicals were nearly all donated from nationally
distributed radical newsletters, newspapers and magazines. The archives were
meticulously organized by category into file folders with a heavy emphasis
on local organizing efforts.

The library and collective house on Cherry Street flourished in the early
years of this decade with the rise of anti-globalization, and post-911,
anti-war organizing efforts nationally and here in Richmond. We hosted many
organizing events, community dinners, fundraisers, and all along with that,
the library's collection grew to well over a 1,000 titles by 2002. When the
house first started, we were the only household like it in the city and a
nerve center for the larger local radical community. In time there were
multiple collective houses and even a warehouse in Jackson Ward that housed
Queer Paradise, an event space and living quarters for the radical Richmond
Queer community.

In early 2002, several members of the house on Cherry Street started
expressing interest in purchasing a home in Oregon Hill to establish
Richmond's first anarchist-owned collective house. After months of getting
our financial information lined up and looking at many houses, Yvonne, RJ
and myself from the 325 Cherry Street collective bought a home at 506
south Pine Street, diagonally across from the famed Mama Zu's restaurant.
We brought a fourth person, Nichole into the mix and began moving in, as
well as moving the library on Halloween night in 2002.

The new house had a great front room, just inside of the main doorway that
we designated to be the new home for the library, which quickly became
dubbed the Flying Brick, courtesy of a long-time pal and supporter of the
library, Robert Cataldo. The northern wall, had two large sunken areas on
either side of a large chimney. It was ideally suited to build floor to
ceiling shelving in the ten foot high room. With the help of a handyman
friend of ours we did just that. The total space in those two areas alone
could house 1,500 books. We also had a community computer with internet
access, an ever-growing zine library that now took up an entire bookcase
of its own, and three full-sized file cabinets loaded with a couple of
thousand magazines, newspapers, file folders, journals, etc. The radical
Richmond archives had grown to take up half of a file cabinet all on its
own.

With the new location and an open-interior floor plan on the lower level
adjoining the library we began to host more events than ever before. With
the furniture in the rooms confined to the walls we could hold up to 50
guest standing and up to 30 or so seated. We had events ranging from book
readings, movie and documentary screenings, lectures, political
discussions, puppet shows and the occasional musical performance. A
wheelchair ramp was built to allow even better accessibility and we began
having somewhat regular open hours, at first informally and on the
weekends and in later times, with members of the house and outside
supporters.

The library in time, with the support of many dedicated supporters grew
to near full capacity of around 2,000 books, a video and dvd library, a
bursting at the seems archives and periodicals collection, zines and
pamphlets galore and files spilling out of the file cabinets. In 2008
after nearly six years of the library at its Pine Street locale, and nine
years of living together, the three primary inhabitants and founders of
the house and keepers of the library made a decision to sell the house as
multiple people were preparing to move out and onto new challenges in
life. We talked of many scenarios involving what to do with the library
and decided that our most desirable situation would be to try and find an
ally or supporter of the library who was interested in purchasing the
house and taking over the collection in full. Fortunately, that scenario
played out, when our long-time friend and fellow activist, Robert Cataldo
was able to do just that in late summer, 2008. Robert and company are
busy giving the library a fine tuning in preparation for a re-opening of
the library to the public in the near future, just in time for its
ten-year anniversary.

*Since opening up in November 2009, after 2 interest meetings to get feedback from potential volunteers and friends of the Library, we once again began doing open hours Mondays 9-4 and Thursday 4-9.

Busy lives and a rotating cast of housemates and volunteers slowed down activity after a strong start in the winter of '09-'10, but we are going steady now, hosting film showings by local film makers, potlucks, benefit events, and regular open hours that distribute information about theory and practice of anti-capitalist and radical politics in Richmond and around the globe. Groups such as the Richmond Industrial Workers of the World and the Richmond Reproductive Freedom Project now use the space as a regular spot for their meetings, as well as being a spot on Tricia Shapiro's book tour for her latest book, "Mountain Justice" published by AK Press. We of course are still looking for volunteers and new ideas, so feel free to stop in and see us, or shoot us an e-mail at theflyingbrick@riseup.net!

See you in the libraries and on the streets!
- Nathan Stickel, 2010

"The revolution is not in the formation of counter-institutions, but in the revolutionary potential of the collectives which can use the resources provided by liberated spaces."

Come visit us for open hours!