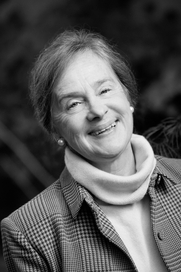 Kate Auspitz is the author of The War Memoirs Of (HRH) Wallis Duchess of Windsor. She is a historian, professor and public servant, and has published mysteries under the pen-name Sophie Belfort.

What is the book about?

The book is about winning World War II, but I did not call it "How I Saved the World by Wallis, Duchess of Windsor" because she did not strike me as someone who would know or care she had done that. As I have her say, "I was never ambitious in that way."

The book is also about politics and diplomacy, and the ways in which, in both spheres, able purposeful people cope with others who are creatues of impulse and vanity.

What inspired you to write about Wallis Simpson?

I had been interested since college in the inter-war period and in the conflict between those who believed war with Hitler was inevitable and those who thought he could or should be appeased. That was an enduring scholarly and, I might also say, moral obsession. Wallis had been a family joke of the "if she had not existed they would have had to invent her" variety. The eldest son of George V was obviously unsuitable. That august monarch had said to his proper heirs, then Duke and Duchess of York, "Of course your brother will never be king;" and Elizabeth had written to her mother, "we thought this was nonsense." I thought it would be fun to see how far one could take the notion that the Abdication was, in truth, a bloodless coup. Mrs. Simpson is, thus, the story.

The War Memoirs isn't history. But you—or "you"—go so far as to ground numerous details in footnotes to Wallis' and many other primary sources. What exactly is The War Memoirs?

It is a work of fiction, set firmly in history and seen, in large part, as it was seen by the contemporaries whose works I cite. An alternative history, perhaps. I think much of it could well be true.

Nabokov included a fake family tree in his Ada. Are any of your footnotes fake?

All of the citations are accurate and, to the best of my ability, verified as carefully as I would for scholarly publication. The only false footnotes deal with Wallis's school chum Polly Parsons Whitman, her husband Skip, and my supposed conversation with their daughter. The Whitmans are an invention but they represent the contribution of the Ivy League and the Seven Sisters to the victory, and I honor their memory—as I pretend to do by claiming to have changed their names.

Is there any other charcter, then, apart from the Whitmans who is based on such an archetype?

One, and only one, is based on a person I know well: the old man on the pier in San Remo is, mutatis mutandis, a naval veteran fiercely loyal to a political family, a gallant and devoted friend to any friend of theirs.

You provide indellible, convincing portraits of Simpson, the Duke of Windsor, Ribbentrop, the Italian diplomat Galeazzo Ciano and others. Where does history leave off and novel begin? That is, if it weren't a novel, who should sue you?

Nobody would trouble to sue me. I wish. The portraits are drawn from life—the situations in which I put people are fictional. If I know that something actually happened, I footnote it. There are all sorts of funny coincidences, which, as I began seriously to research the novel, continued to astonish me. I encourage people to read the book and find them. It is true, for example, that Count Ciano compared Goering to Al Capone, and that appeals to me because I believe that class always trumps ethnicity.

The novel becomes very much fiction as I imagine what Wallis makes of the Nazis when she goes to Germany with her husband in the fall of 1937. I have her find them repulsive and that is a sort of turning point, or, as Churchill would have said, the end of the beginning. It comports, too, with my notion that much in politics is aesthetic or even erotic—a response to a candidate is visceral, rather more than ideological or even self-interested.

Do you think any of the fictionalized participants would have enjoyed your novel?

I hope that all the nice ones would. I was partly inspired by Duff Cooper's Operation Heartbreak. Somerset Maugham wrote better than almost anyone of shady ladies. The book is a homage to P.G.Wodehouse and to John Buchan—the Scottish aide-de-camp's two brothers are called "Archie" and "Sandy," names taken from his Great War novels. I wish Count Ciano, who always noted if a woman was clever or witty, would have liked it too.

How was it to write? Do the limitations and opportunities of the history and the novel get in each other's way, or do they help?

Oh, it was wonderful to write. I did not have to plot it—a weakness of mine. And Clio, muse of history, kept dropping things in my lap: Wallis's divorce lawyer really did serve as a judge at Nuremberg; FDR had known, for years, Herman Rogers and his wife, with whom Wallis stayed in China and in France; Ciano really did admire Duff Cooper's biography of Talleyrand and lent it to Mussolini who disliked it intensely; Harold Nicolson wrote a biography of Anne Morrow Lindbergh's father, worshipped her and had a poor opinion of Charles Lindbergh, even before he became an isolationist; John Buchan did get an honorary degree at Harvard Commencement in 1938, the year they snubbed Joseph P. Kennedy; "Buttercup Kennedy" played a role in the Simpson's divorce....But, please, read the book.

Did you find anything remarkable that you did not use in the book?

Yes, I had the text of Queen Elizabeth's June 1940 radio address to the women of France. I got it from the Royal Archives at Windsow, saying, truly, that I wanted to read it to my mother—we had always known about it but not known what she said—and I had to agree not to copy or publish it. I refer to it through Mollie Panter-Downes's account in London War Notes. It is a wonderful, womanly message of hope and encouragement. The recent official biography, The Queen Mother by William Shawcross, quotes from it extensively and notes that André Maurois, then in London, helped draft it.

Did anything not work out well?

Yes, again. I was crushed when Sotheby's told me that Mohamed al-Fayed, father-in-law manqué of Diana, Princess of Wales (who lost her H.R.H.), had bought the rights to their catalogue of the Windsors' jewelry auction. I would have liked to include some of the more spectacular pieces, a leopard or two and some necklaces, but I was not prepared to do business with al-Fayed. In any case the 16 contemporary illustrations, which I think add much to the book, are all black and white.

My favorite scenes from The War Memoirs—and your mystery novels too—involve the tension and humor in the social situations involving unequal understanding or knowledge. Are these your favorite scenes to write? Do you have a model here?

Thank you. I had not recognized this myself. I think such social situations are central to all comedy. I did not have a conscious model, though I thought of Gentlemen Prefer Blondes (which Edith Wharton called a "great American novel,") and Lorelei Lee as a forerunner of Wallis, ignorant but not stupid.

You've now written straight history, mystery and novelized memoir. Anything other genres you want to try out?

Tempted to write political satire, but it would have to be published posthumously.

Pretty large, because I cannot bear to give away good books. Mostly French and British, fiction and history up to about 1950. Americans are Mark Twain, James Thurber, Edith Wharton, and Willa Cather, not too many works by living writers, except for Lisa Carey and a select few.

What are you reading now?

I have just finished R.V.Jones's The Wizard War, about British scientific intelligence during WWII and The Man Who Never Was, the story of the floating body with misleading documents, now told more fully as Operation Mincemeat. I am also rereading Molière because I like to read French on the subway where I can concentrate on the language. By far the best book I have recently bought is a cheap edition of Dom Juan. The play is fascinating in the ways it differs from Don Giovanni, and the book itself is a revelation about the way literature is taught in France. The text is interspersed with suggestions that passages be read aloud taking care to breathe so as to make plain the rhythm of speech, or that scenes be re-written to include an absent character. It concludes with a typology of five kinds of seduction, involunatary, deliberate, corrupt, hypocritcal, and cynical, each illustrated with passage from another French classic. Imagine a high school edition of Julius Caesar, with five kinds of tyrannicide: noble, opportunistic, reluctant, reckless, deranged.

The War Memoirs Of Hrh Wallis Duchess Of Windsor (65 copies)
The Radical Bourgeoisie: The Ligue de l'Enseignement and the Origins of the Third Republic 1866-1885 (2 copies)
Wallis: My War: A Novel (1 copies)