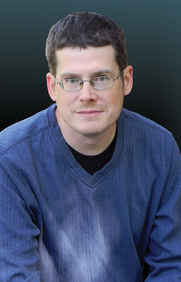 Alex Grecian is the author of the Proof graphic novel series. His new book, The Yard, was released recently by Putnam.

For those who might not have yet had the chance to read The Yard, give us just a short introduction to the book, if you would.

Jack the Ripper has done his nasty work and disappeared. The citizens of London are terrified and they don’t trust their police anymore. The homicide rate is at an all-time high and police morale is at an all-time low, when Walter Day, the newest detective at Scotland Yard, is assigned to catch a cop-killer. Overwhelmed, Day turns for help to an eccentric doctor named Kingsley who is well on his way to becoming the first forensics scientist in England.

What first interested you about the post-Jack the Ripper period in London police history?

The actual Ripper murders have been talked about to death (so to speak). Jack the Ripper's fascinating, of course, but I don't feel like there’s much left to say on the subject. At least, not by me. But the impact he left on the people around him had to have been enormous. Something that devastating and that frightening doesn't happen in a vacuum. He didn't kill those five women, and then disappear and life went back to normal for everyone. He permanently changed London—and the world—and that is fertile ground for an entire series of stories.

Tell us about Walter Dew, the loose prototype for your main character, Inspector Walter Day. What about him drew you to tell his (fictionalized) story? And there are other quasi-historical characters in the book too, right?

There's all sorts of conflicting information out there about Walter Dew, but it's clear that he was one of the most remarkable policemen Scotland Yard has ever had. He first came to the public's attention when he chased down a man who'd been mistaken for Jack the Ripper. It was a long footrace, and Dew was always immaculately dressed, but he caught the suspect and then ended up saving him from a lynch mob. Years later, he solved the famous Crippen case, when he pursued an escaped murderer across the ocean. Dew's ship was faster and he arrived in Canada a day before the killer did. He was waiting on the dock when Crippen (who had murdered his wife) pulled into port. It was a huge news story on both sides of the Atlantic and made Dew a bit of a celebrity. I had planned to use him in The Yard, but realized that I'd be bound by his actual history and wouldn't be able to take a lot of liberties. So I ended up fictionalizing him a bit. But my character, Walter Day, is very much like Dew. He has Dew's determination and goodness.

Likewise, Dr Bernard Kingsley is based on the real-life forensic scientist Bernard Spilsbury. I fictionalized him too, but I used real-life police commissioner Sir Edward Bradford without changing him a bit.

Do you recall which part of The Yard came to you first?

For me, the entire book was sparked by the statistic that an average of ninety-six bodies a month were pulled from the Thames, most of them with their throats slit. That's a fraction of the murder victims that must have been found in the city every month and the police force was ludicrously understaffed. Combined with the low morale left in the wake of the Ripper murders, protecting the people of London must have seemed like an overwhelming job and yet those detectives showed up to work every day. I wanted to explore the mindset of the police. And I still do. I think I've barely scratched the surface of what it must have been like.

This is your first prose novel. What was your favorite part of the writing process? And which part did you like the least?

I had originally intended to write this as a graphic novel and already had some interest from comic book publishers. I’m more comfortable writing prose than I am writing comic books, but it was still a huge gamble to write it as a novel. In the end, I'm very glad I did, but I didn't know what would happen as I was working my way through the book. It was a little scary.

Besides writing fiction, you're also a type designer. How did you get into that, and do you have a favorite typeface (yours or someone else's)?

I haven't designed a typeface in a long time, but it was something to keep me busy while I was working some of the day jobs I had. Other people played solitaire during their downtime, and I designed fonts. I couldn’t exactly write anything, but designing a font looked enough like work that I could get away with it. There's a precision involved in the process that I enjoyed. Obviously, each letter and number has strict limitations; if you stray too far from what an "a" looks like, it stops functioning as an "a". But within that structure, there's a vast amount of creativity you can bring to bear. The structure is what makes it so interesting.

I'm particularly fond of Sabon, a typeface designed by Jan Tschichold. It's traditional and easy to read, but it feels generous and open.

When and where do you do most of your writing? Do you draft your work in longhand, or at the computer?

I have a small, eight-foot-by-eight-foot office off of my kitchen. It was originally meant to be a breakfast nook, but I took it over while our sunroom was being remodeled to be my office and I never moved out of it. We've now turned the sunroom back into a sunroom. I work on a Mac, in MS Word. I can't imagine writing anything longhand. My handwriting is so sloppy that even I can't read it and I have to ask my wife for help deciphering my grocery lists.

What's your personal library like? What were your favorite books as a child?

I have a pretty large personal library. Books are my main vice and indulgence. The bookcases that line two walls of my office house the sections on writing and reading and forensics. The actual library room holds nonfiction and all my fiction is downstairs. I love books.

As a child, I read everything I could get my hands on, including Sherlock Holmes and Tarzan, books that have a large influence on what I now write about. I still have many of the books I collected as a kid.

What have you read recently that you enjoyed?

In nonfiction, I just read Hellraisers by Robert Sellers, which focuses exclusively on the drinking habits of four legendary actors: Richard Burton, Richard Harris, Peter O'Toole and Oliver Reed. Apparently, when Burton went in for back surgery, the doctors discovered that his spinal column was encased in crystallized whiskey. I don't know how that’s even possible, but I'm fascinated.

In fiction, I recently reread The Quiet American by my favorite author: Graham Greene. I'm always amazed by how well his work still stands up, never seems dated, and he has a wonderful facility with language. I'm always hoping he’ll influence me. I'm planning to reread Brighton Rock now, and may go ahead and work my way back through his entire catalog.

I've also been reading a lot about the English Midlands, since that's the setting for my next book.

Tell us a bit about that next project: will we be seeing more of Day and Hammersmith?

I'm currently working on a sequel. Day and Hammersmith are sent to a small coal mining village, called Blackhampton, to investigate the disappearance of a family. They discover some disturbing secrets there.