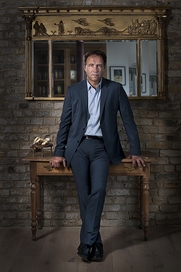 Anthony Horowitz is the author of the popular Alex Rider series of books, as well as several popular UK television series and mini-series, including "Foyle's War," "Midsomer Murders," and "Poirot." His latest work is The House of Silk, a new Sherlock Holmes adventure published in November 2011 by Mulholland Books.

You've written that you "paused for at least half a second" before agreeing to write a new Sherlock Holmes novel. What made you hesitate, and how did you overcome the hesitation?

I had two concerns. The first was that, with so much Sherlock Holmes around—the Robert Downey Jr. films and the very successful TV series on BBC—I might be seen as jumping on a bandwagon. Also, I have my doubts about this rash of prequels, sequels and add-ons that are appearing. Are they just a cynical way to sell books? I agreed only because I love Sherlock Holmes and couldn't resist the idea of moving into 221b Baker Street for a short while. I knew I could write a good book. I knew I would enjoy writing it. In short, I couldn't resist it.

What sort of research or preparation did you do before you started writing?

I began by re-reading the entire canon, which didn't take long. There are only 56 short stories and four novellas. I have to say that it was great to have an excuse to immerse myself once again in Sherlock Holmes. I then read a couple of books about nineteenth century London which helped me decide on some of the locations. The plot for The House of Silk came very quickly. I actually started writing it a week after I signed the contract ... the prologue and chapter one, anyway. That was how I found my voice.

The biggest challenge was to stretch the very elegant but fragile structures of the original Doyle novels to the 95,000 words demanded by my editors. I overcame this by effectively writing two short novels‐The Man in the Flat Cap and The House of Silk‐and intertwining them. I never use the word "easy" about writing but I have to say that I loved writing the book and that an awful lot of it seemed to fall into my lap. It took four months‐half the time of an Alex Rider novel.

What do you think it is about Holmes and Watson that makes them such wonderfully lasting characters?

It's their interdependence. Doyle's genius was to create a character who is cold, aloof, irritating, an occasional drug addict, a man who never reads fiction and knows nothing about philosophy or politics ... and to partner him with a warm, affable, civilized, intelligent and totally loyal doctor. We read the books for the atmosphere and for the mysteries but above all because this is the greatest friendship in literature.

Do you have a favorite Sherlock Holmes story? If so, which, and why?

My favourite story is "The Dying Detective" (which takes place three days before The House of Silk begins). It's a chamber piece. There's no detection and no actual crime. But it's a great duel of wits with a memorable villain and a startling denouement.

As a big fan of Conan Doyle's Professor Challenger books and his short stories (plus the Holmes mysteries, of course), I really liked your line "It makes me wonder if there is any other author in the English language who has been forgotten for so much and remembered for so little." For those who might not know Conan Doyle's other works, which do you recommend?

I haven't read everything but readers should certainly start with The Lost World (which influenced a certain S. Spielberg). The Brigadier Gerard stories are fun but I'd look at some of Doyle’s horror stories—in particular "Lot 249".

Care to share your thoughts on the BBC's "Sherlock" so far?

It's a complete triumph, written by my friend, Steven Moffat. Benedict Cumberbatch will go down as one of the greatest Sherlocks and Martin Freeman is an endearing Watson. What's so clever about the series is how it transfers the stories to the 21st century whilst remaining absolutely true to the originals. There are lots of new ideas (I love the texting) but the essence is intact.

What sorts of books would we find on your bookshelves? Any particular favorites that you find yourself re-reading often?

I have a large library of nineteenth century fiction which certainly helped with the writing of The House of Silk. Charles Dickens is my favourite author and I return to his novels over and over again. You’ll also find Trollope, Gissing, Jane Austen and Thomas Hardy.

Which books have you particularly enjoyed recently?

I read Victoria Hislop's The Thread while I was in Greece. It's an epic history of Thessalonica filled with memorable characters and events. I also enjoyed Erik Larson's In the Garden of Beasts, an interesting take on the rise of Nazism; a period of endless fascination. I'm currently reading Chapman Pincher’s excellent history of MI5, in preparation for a (possible) new series of "Foyle's War".

Tell us a bit about your next project. Is there another Sherlock Holmes adventure in the vault?

I'm afraid not. I think one is enough and, in all honesty, I don't think I could do better than the House of Silk. However, I do have an idea for another thriller set in 19th Century London and it's just possible that Sherlock Holmes might flit across its pages. We'll see ...