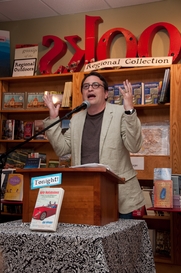 Jay Wexler teaches law at Boston University, and writes a wide variety of humor pieces and essays for various publications. He is the author of Holy Hullabaloos and the new book The Odd Clauses: Understanding the Constitution Through Ten of Its Most Curious Provisions, published by Beacon Press.

You write in the introduction that you first got the idea for writing a book about the Constitution's "odd clauses" while you were working in the Office of Legal Counsel for the Clinton administration. Do you recall a particularly odd question the OLC was called upon to advise on while you were there?

There were all sorts of odd questions, but the one I spent most of my time on had to do with whether the President had the authority to create a national monument in the middle of the ocean. President Clinton was interested in creating a giant national monument in Hawaii to protect coral reefs, but it's not immediately clear that the relevant statute giving the President the authority to create monuments (it's called the Antiquities Act) gives him the authority to make monuments in the ocean. The question required a good bit of statutory analysis as well as analysis of the proper scope of the so-called "Property Clause" of Article IV of the Constitution. The legal opinion that came out of all that work is here. As it turned out, it was President Bush, not Clinton, who ultimately made the Hawaii monument.

How did you settle on which "odd clauses" to include? Were there a few that came close but didn't quite make the cut (and if so, which)?

This was the hardest part of writing the book.  I had to think a lot about what I meant by "odd." Thinking about what makes something odd in turn makes you think about what makes something "normal." So I thought a lot about what kinds of clauses are typically expected in the Constitution, and then what sorts of clauses are not quite like that. Ultimately, I decided that for me what makes a clause really odd is when it's very specific—when it carries out or illustrates some key constitutional principle in a very specific way.  Once I settled on this understanding, I was able to exclude some clauses—like the Property Clause, for instance, or the Pardon Clause, that didn't fit my meaning of "odd."

Tell us a bit about how you've structured the book, using each chapter to highlight an odd clause and also connect that clause to a broader constitutional principle.

I wanted to do more than just convey a bunch of interesting and weird constitutional trivia (though I wanted to do that too). So I decided that I could try to use these weird clauses as an entertaining way of giving readers an easy in to understanding the different purposes of the Constitution. By linking each odd clause to a broad principle, I figured the reader would end up after reading the book with a general understanding of the primary functions of the Constitution without having to trudge through some massive boring tome on constitutional law to do it.

In the chapter on the titles of nobility provisions (Article I, Sections 9 and 10) you note that an amendment originally proposed in 1813 which would enact a blanket ban on American citizens accepting titles of nobility could theoretically still be ratified by enough states to become part of the Constitution (as happened with the 27th Amendment, originally proposed in 1789 but not enacted until 1992). Are there other proposed-long-ago amendments still out there which could possibly be ratified?

I'm actually not entirely sure about this. I know that the Equal Rights Amendment, which was never ratified, is no longer open because Congress set a deadline for when it had to be ratified. I think there might be a Child Labor Amendment that was proposed in 1924 that could theoretically be ratified, but there's no need, because everyone now agrees that Congress can prohibit and regulate child labor (this wasn't always the case).

What was the most surprising thing you discovered while researching this book?

I think that Thomas Jefferson helped pass a bill of attainder through the Virginia legislature. The bill basically condemned a specific individual to death and authorized the population of the state to hunt him down. This didn’t seem too "Jeffersony" to me.

On your blog, Odd Clauses Watch, you've been reporting about a "brewing odd clauses controversy." Tell us a bit about what's happening.

A few odd clauses controversies have popped up since I started the blog (like whether the President can "sign" a bill with an autopen if he happens to be in France when the bill needs to be signed). The most recent one has to do with President Obama's recess appointment of Richard Cordray to chair the newly-created Consumer Financial Protection Bureau. Republican Senators refused to confirm Cordray and even started holding pro-forma sessions (where nothing at all was done) every three days just to keep Obama from making a recess appointment, on the theory that anything less than three days doesn't count as a "recess." The President went ahead and made a recess appointment anyway, on January 4.  We'll see if that action holds up in court.

Are there any amendments you'd like to see made to the Constitution?

I think that amending the Constitution is a pretty risky thing to do, and so I don't really advocate making any amendments, at least at this time, though the idea of making it clear that the first amendment shouldn't apply to protect corporate campaign speech is tempting.

Are there any existing constitutional provisions that you'd repeal?

The natural born citizen clause, which I discuss in the book, is ridiculous and should be repealed. Why should any American citizen be denied the right to run for President?

What books have you enjoyed reading lately?

My favorite non-fiction book that I read in the past year was Jason Fagone's Horsemen of the Esophagus, about competitive eating. I generally read a lot more fiction than non-fiction, and in that category, some of the best books I've read recently are William Giraldi's Busy Monsters, Michael Griffith's Trophy, Steve Almond's God Bless America, and John Warner's The Funny Man.

Can you tell us a bit about your next project?

I'm publishing my first book of fiction later this year with Quid Pro Press, a motley collection of short stories, humor pieces, experimental errata, goofy pictures of fruit, and a script for the pilot of a sitcom called "Death Row." The book will be titled The Adventures of Ed Tuttle, Associate Justice, and other stories and will feature a fabulous cover by master artist David Croy. It's a very different kind of project for me, and I'm really looking forward to reading from it in bookstores and talking about it online wherever I can.