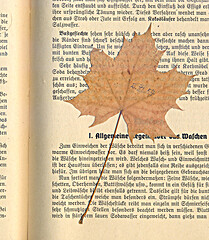 This topic was suggested to me by some comments in the Book Talk thread about inscriptions. I was reminded that I have found a number of interesting objects in books, not least have been letters, postcards, cash, announcements (birth, wedding, death), and so on. I have saved some of the more unusual or poignant, such as a letter to an ill WAVE in a VA hospital, circa 1951. One item that I particularly enjoyed finding was a train ticket from 1944 (Pimlico - West Arlington/Route 5 & 33). An FBI warning on the face of the ticket exhorts the ticketholder to report suspicious persons to the FBI and to "Beware of those who spread enemy propaganda! Don't repeat vicious rumors or vicious whispers. Tell it to the FBI."

As I say, I saw comments on another thread that lead me to believe there are other folks out there who may have a similar collection of found things - if you are one of them, I hope you will share your discoveries.