A Pearl of Wisdom and Enlightenment 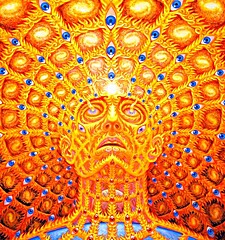 Believe those who are seeking the truth; doubt those who find it.
André Gide.

And resting in the ocean, dipped into the sea, I find glimmers of One Taste everywhere.
Ken Wilber.

I have no special talent. I am only passionately curious.
Albert Einstein. Make a snake and put it up on a pole;
anyone who is bitten can look at it and live.
Numbers 21:8.

I prefer the folly of enthusiasm to the indifference of wisdom.
Anatole France. Eternity is a mere moment, just long enough for a joke.
Hermann Hesse. Artwork by Alex Grey.
Also author of "Oversoul", depicted above.

Be ye lamps unto yourselves.
Siddhartha Gautama Buddha.

"Goodbye," said the fox.
"And now here is my secret, a very simple secret:

It is only with the heart that one can see rightly.
What is essential is invisible to the eye."

"What is essential is invisible to the eye,"
the Little Prince repeated, so that he would be sure to remember.

"It is the time you have wasted for your rose that makes your rose so important."

Laughter relieves us of superfluous energy, which, if it remained unused, might become negative, that is, poison.
Laughter is the antidote.
George Ivanovitch Gurdjieff.

The only true wisdom is in knowing you know nothing.
Socrates.

Love is the only sane and satisfactory answer to the problem of human existence.
Erich Fromm. - The Art of Loving.

To see a world in a grain of sand
And a heaven in a wild flower
Hold infinity in the palm of your hand
And eternity in an hour.
William Blake. - Auguries of Innocence

Life is a festival only to the wise.
Ralph Waldo Emerson.

There are many paths to enlightenment. Be sure to take one with a heart.
Lao Tzu.

It's so simple to be wise. Just think of something stupid to say and say the opposite.
Sam Levenson.

They do not know very good Latin, these botanists.
Albert Hofmann. Spoon boy: Do not try and bend the spoon. That's impossible. Instead... only try to realize the truth.
Neo: What truth?
Spoon boy: There is no spoon.

Trying is the first step towards failure.
Homer Simpson.