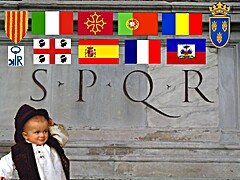 An open forum for scholars, students, speakers and enthusiasts of the Romance languages and dialects, as well as Romance-lexifier creoles the world over.

Medievalists with an interest in the old and middle stages of the Romance languages are most welcome to participate.

Latinists and those with a smattering of the Italic languages may also feel at home here.

See the group website below for an overview of the Romance languages.