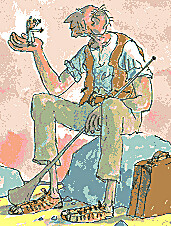 It can be narrowed if the group proves too big or unfocused, but for the time being assume this group will cover everything from picture books to Melvyn Burgess, probably concentrating mostly on Arthur Ransome, Noel Streatfeild, Enid Blyton, the ubiquitous HP, Diana Wynne Jones, Lewis Carroll, A. A. Milne, E. Nesbit, C. S. Lewis, Roald Dahl, and other well-represented authors.