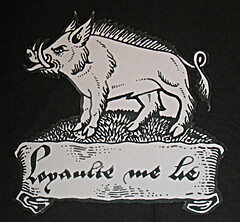 For those who study the life and times of King Richard III, last of the medieval English kings (2 October 1452 – 22 August 1485); he was King of England from 1483 until his death at the Battle of Bosworth, which ended the Wars of the Roses, a dynastic struggle in the later middle ages that pitted Yorkist against Lancastrian.
Books here may include fifteenth-century England and its culture, and the reputation of Richard III in history, fiction, and drama, especially Shakespeare, whose play made Richard III infamous.