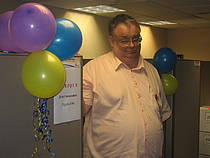 About my libraryMy first, still living book was given and inscribed to me by UPR chancellor Jaime Benítez in 1959 or 1961; another personally priced item is one which my father gave me in the mid 1960s as a 3 Kings Day (Epiphany - January 6th) present. I have thousands of paperback mysteries from the 1960s and 1970s, a few from the 1940s (Pocket Books, Dells), and countless others from the 1980s, 1990s, and 2000s). Began acquiring more hardcovers regularly in the mid to late 1970s, and 1980s, and in larger amounts in the 1990s amd 2000s as Bookstacks Unlimited and Amazon were discovered. Amazon has made simple data entry of many recent acquisitions but it is now harder and harder to enter my disorganized library. I thought in the early 1990s that I must have aroud 15000 - 20000 books; now, I cannot guess. WHen I last moved to our current home (1993), most of my library went into boxes and knots and filled up a room - my personal life project is organizing them in the next few years. By the way, I love books!