HomeGroupsTalkExploreZeitgeist
This site uses cookies to deliver our services, improve performance, for analytics, and (if not signed in) for advertising. By using LibraryThing you acknowledge that you have read and understand our Terms of Service and Privacy Policy. Your use of the site and services is subject to these policies and terms.
FortFairfieldLibrary Profile Books Charts & Graphs Reviews 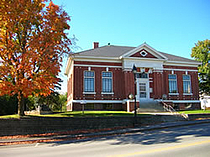 About meFort Fairfield had a private library as early as 1880. It became a town-supported library in 1894 with a circulation of 300 books. In 1911 the town received a grant of $10,000 from Andrew Carnegie - making it one of the seventeen Carnegie Libraries in the state of Maine. With support from the town and by R.J. Noyes of Augusta, Maine, the Fort Fairfield Public Library was completed and officially opened on September 9, 1913.

In 1925 Colonel Franklin Drew, from Lewiston, who regarded Fort Fairfield's public library as one of the best in the State, donated his personal library to it. The Drew Room, where the genealogy records, town reports dating back to the late 1800s, the Fort Fairfield Review, and the Fort Fairfield Journal are kept, are named after his father, Jessie Drew.

In 1989 it was added to the National Register of Historic Places and in 1994 to 1995 a beautiful addition was added as a community room to be used for the benefit of the inhabitants in Fort Fairfield, local clubs and organizations. It also features the children's room, the librarian's office and bathroom, which are all handicap accessible. The community room was used as a temporary town office during the 1994 flood.

In 2007, with the urging of the trustees who decided to join the technology world, a decision was made to computerize the library's collection. 14,000 books were entered into computers for the librarian's and library patrons' use.

About my libraryWe have a collection of approximately 18,000 books, audio books, VHS & DVD movies, as well as, 20 periodicals and 4 newspapers. We have an annual circulation of around 11,000 items.

We have eight internet accessible computers available.
If you want a quiet place to work or read, our library provides excellent facilities. A community room with a large conference area and a kitchenette is also available for local groups and organizations. Please call for reservations.