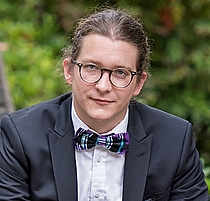 About meJonathan Homrighausen is an Episcopal writer and scholar on Scripture, art, and interreligious dialogue. Currently finishing his MA in Biblical Studies at the Graduate Theological Union in Berkeley, CA, he also works for Lucinda Mosher of NeighborFaith Consultancy, helping various clients walk deliberately into religious difference.

He is also co-author, with J. David Pleins, of "Biblical Hebrew Vocabulary by Conceptual Categories: A Student's Guide to Nouns in the Old Testament" (Zondervan, 2017). His other writings have appeared in Buddhist-Christian Studies, The Interfaith Observer, Religion Dispatches, and Sacred Matters.

He is available for writing and speaking engagements on topics in Scripture and dialogue, particularly in Jewish, Christian, and Muslim contexts.

About my libraryMostly theology and religious studies, especially biblical studies. Included are all books I own (in print, electronic, or audio form), and books I consult for research when I read the whole thing.