HomeGroupsTalkMoreZeitgeist
This site uses cookies to deliver our services, improve performance, for analytics, and (if not signed in) for advertising. By using LibraryThing you acknowledge that you have read and understand our Terms of Service and Privacy Policy. Your use of the site and services is subject to these policies and terms.
JeanKwok Profile Books Statistics Reviews Clouds 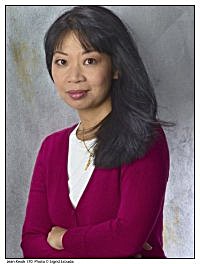 About meLike her protagonist in Girl in Translation, Jean Kwok was born in Hong Kong. Along with her family, she immigrated to Brooklyn when she was five and worked in a Chinatown clothing factory for much of her childhood. After entering public elementary school unable to speak a word of English, she was later admitted to Hunter College High School, one of New York City’s most competitive public high schools. She won early admission to Harvard, where she worked as many as four jobs at a time, and graduated with honors in English and American literature, before going on to earn an MFA in fiction at Columbia. Kwok has worked as an English teacher and Dutch-English translator at Leiden University in the Netherlands, and has been a professional ballroom dancer, a reader for the blind, a housekeeper, a dishwasher, and a computer graphics specialist for a major financial institution. Her work has been published in Story magazine, Prairie Schooner, Elements of Literature: Third Course and The NuyorAsian Anthology.